Adventures in Photography – Somerset and Devon

Coast, heaths and woodlands in the West Country.

I love the Suffolk Coast but every once in a while it is good to explore somewhere different, so last week my partner and I headed over to Somerset and Devon for a bit of photography and to do some scouting around for weekend workshop locations for some courses I am planning to run next year.

Despite living in Somerset for 14 years it is somewhere I have never really explored with the camera, so it was good to get out and see what the North Somerset coast and countryside had to offer.

Kilve was our first stop. It is a Site of Special Scientific Interest (SSSI) and consists of a rocky beach backed by shallow cliffs. These are formed from shale and layers of blue lias stone in which fossils can be found. It is the geology and rock formations which make this location interesting for photography.

The beach has some amazing textures and I love the contrast between the white boulders and the dark layers of rock and sand. It also helped that the weather was really moody when we visited with some dark brooding clouds and just a hint of brightness for contrast. 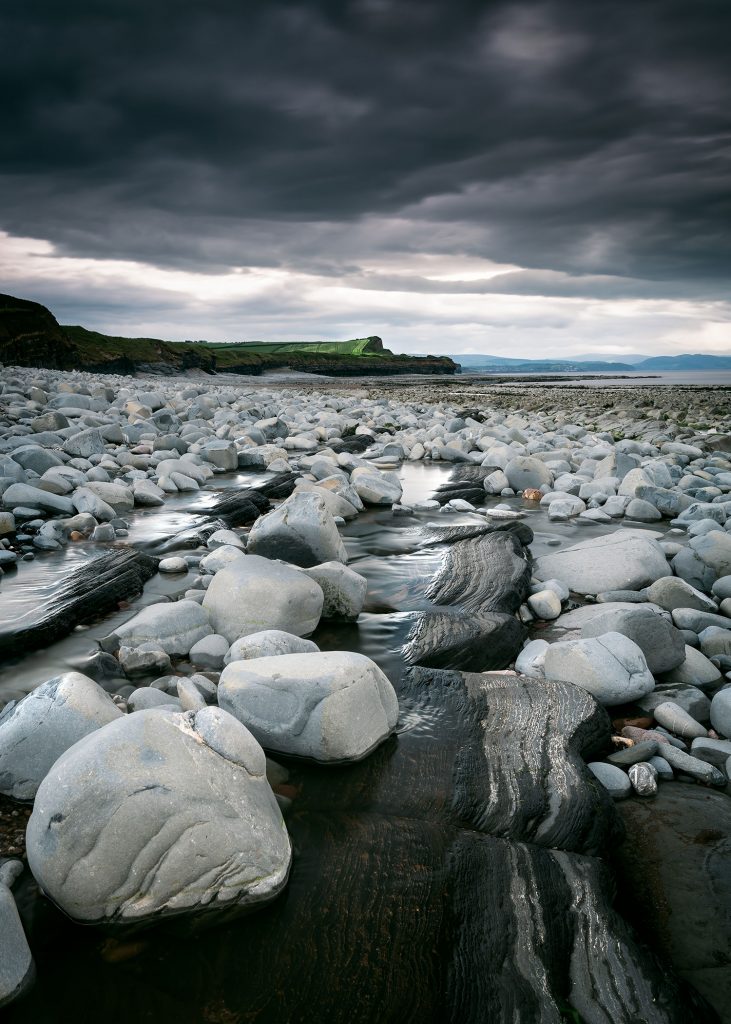 The best time to visit this beach would be on a falling tide but we wanted to shoot at the end of the day and didn’t have that luxury so we ended up working as the waters rose. This worked quite well but you had to keep your wits about you as the tide came in really quickly. 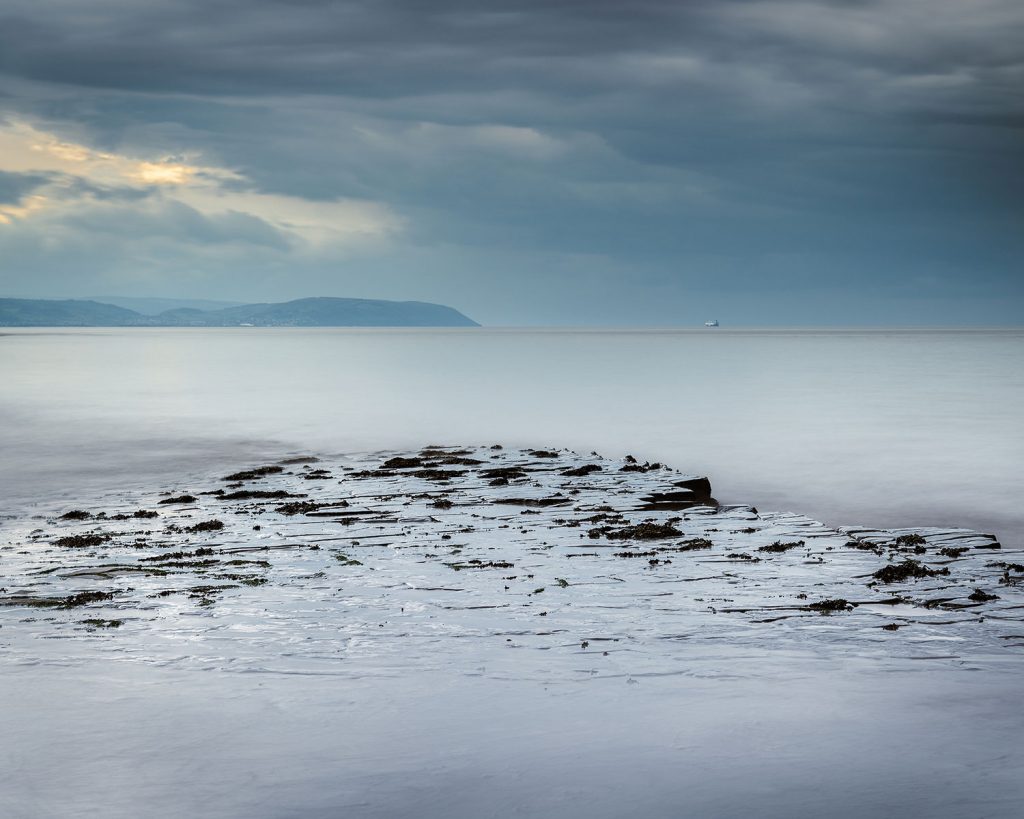 It was good fun to play with some long exposures and experiment with the shapes that the rising waters created. 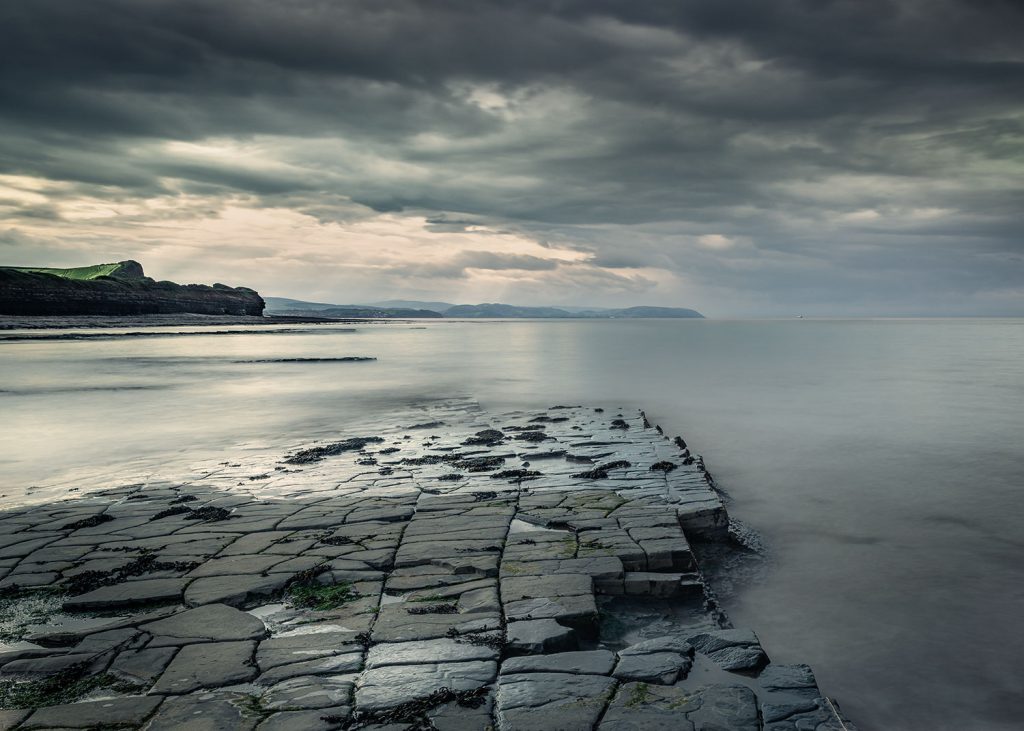 Inland from Kilve lie the Quantocks, a range of low lying hills and an Area of Outstanding Natural Beauty. Being spring, the woods on the hillsides looked amazing and were definitely worth exploring with the camera. My favourite areas were the beach woods near Dowsborough which contained some beautiful old beech trees and were vibrant with new growth. 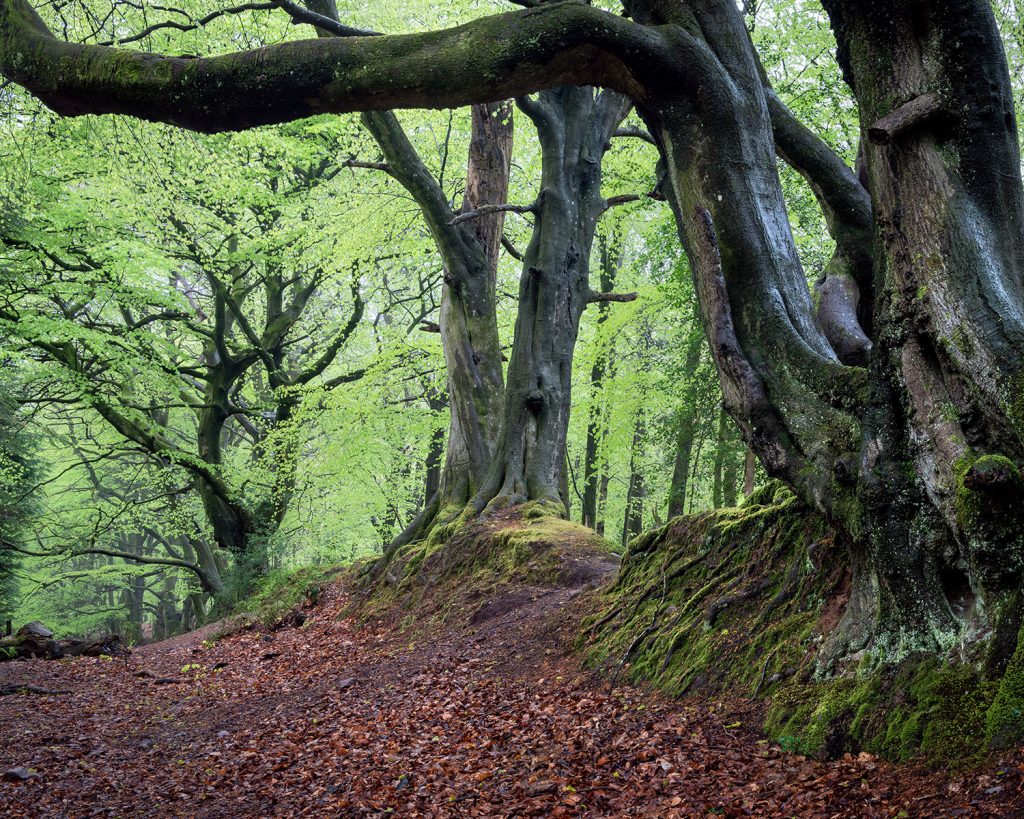 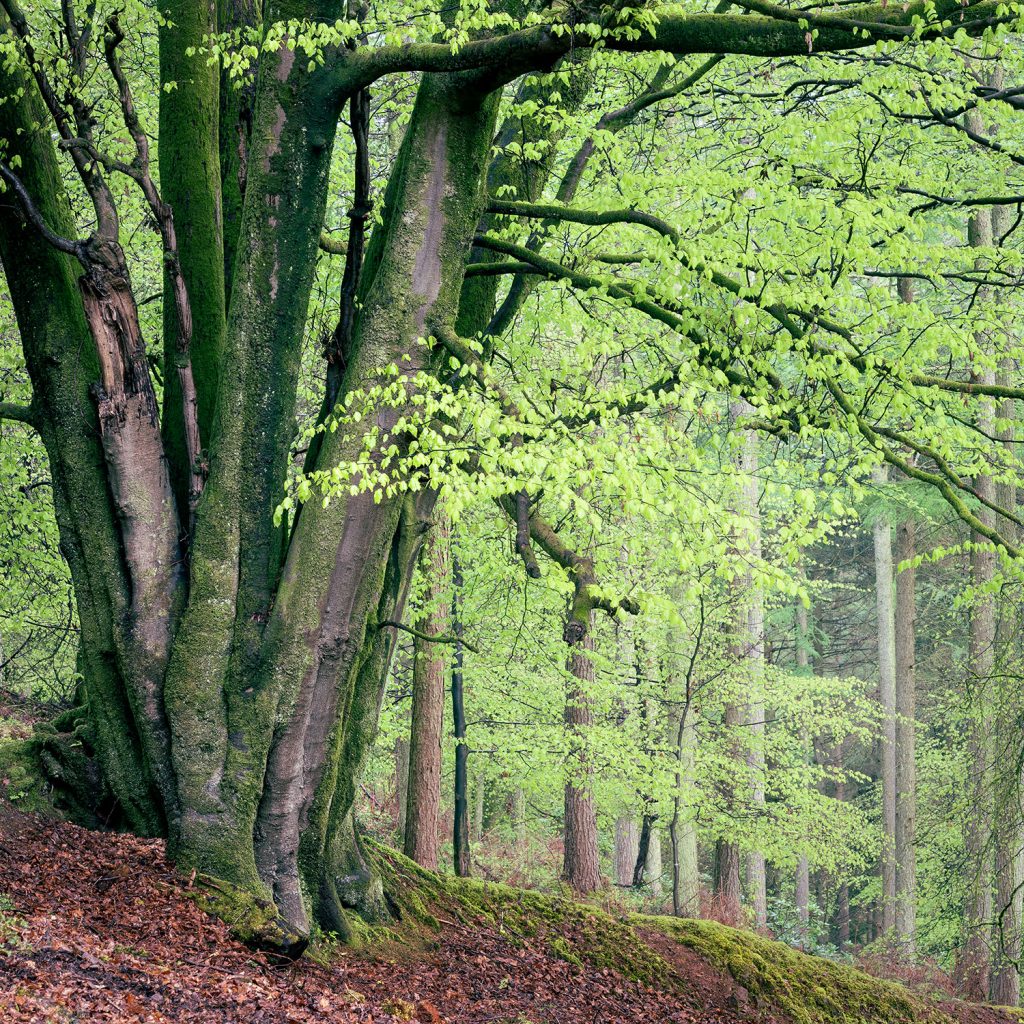 Coming from Suffolk the greenery and vibrancy of the landscape is one thing I miss about the West Country. It does have a lot more rain but as a result the countryside feels so much more lush and the range of trees and plants seem much more diverse.

As we headed into Devon we stopped at Porlock Weir which has a beautiful coastline, a beach full of colourful boulders, and a delightful harbour all surrounded by the hills of the Exmoor National Park. We spent some time in Porlock trying to photograph the flooded Saltmarsh and the row of dead trees it now contains but the light wasn’t idea so I focused on some flowers instead which were really abundant.

From Porlock we explored Horner Woods which lies on the Holnicote Estate and is owned by the National Trust. It is one of the largest “unenclosed” ancient oak woodlands in Britain and sits in a wooded valley around Horner Water. It is a lush green oasis where, unusually, you will find cows grazing amongst the trees. 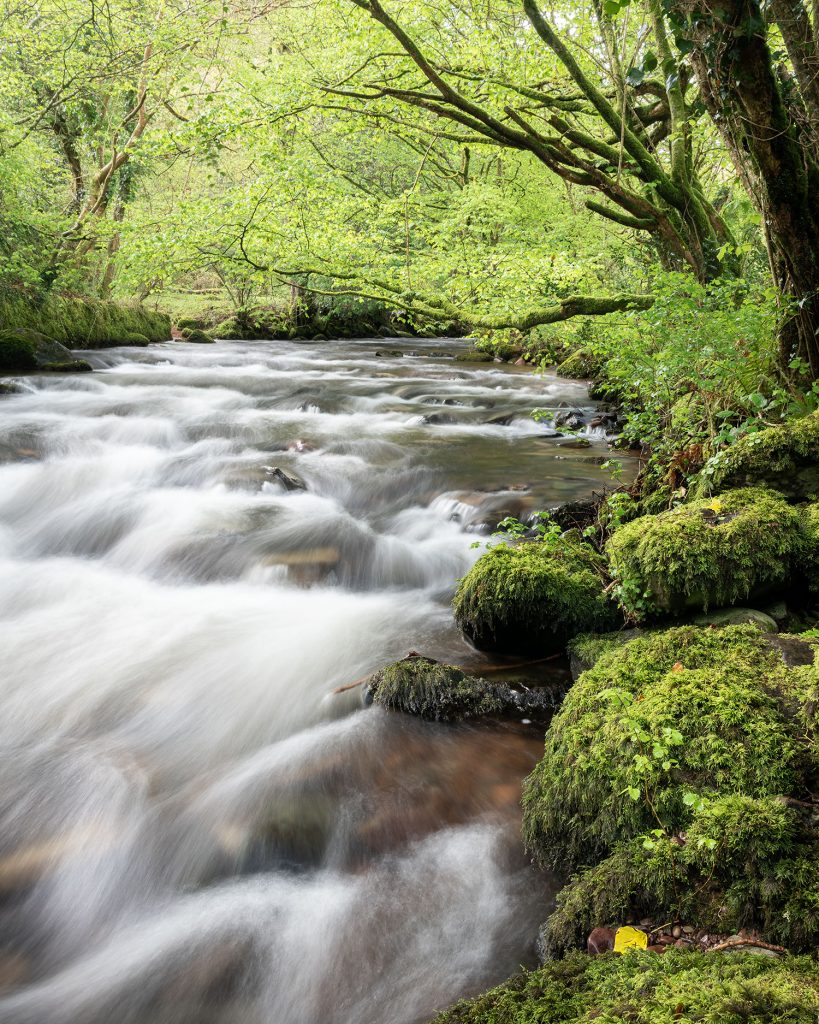 Heading back along the coast we stopped at the Valley of the Rocks which is a rugged section of coastline with some amazing views and some really cute feral goats. The valley is a U shaped dry valley that runs parallel to the sea with some steep and jagged rock faces on its seaward side. It is a great place for sunset photography. 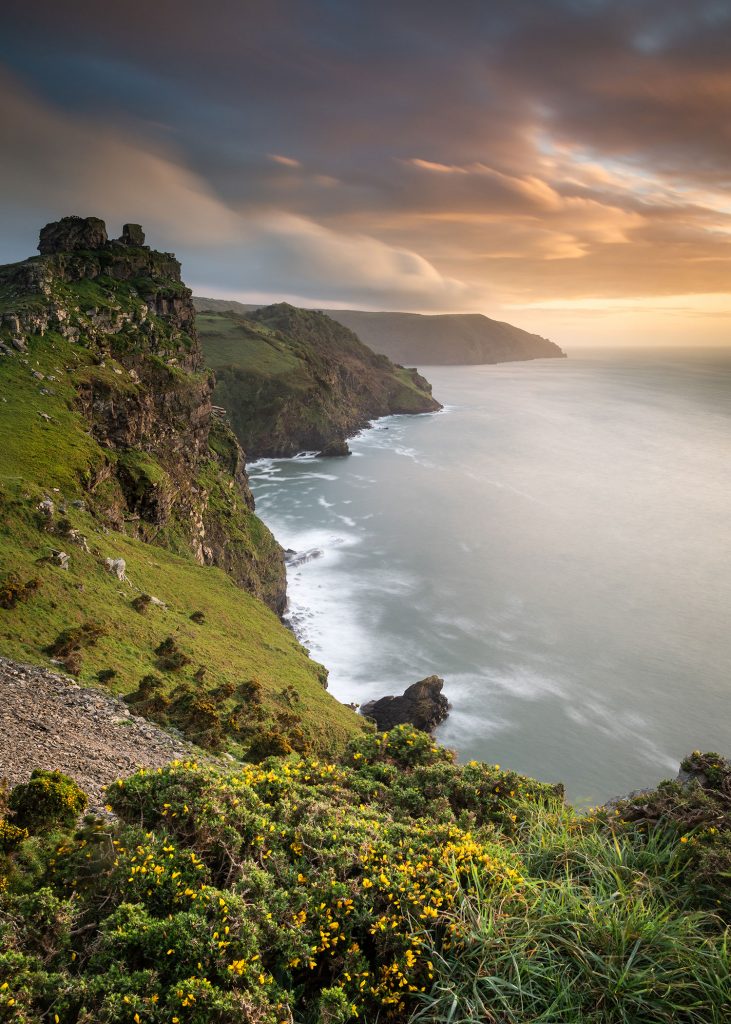 Moving further around the coast we visited Woolacombe and Mortehoe before stopping at Mouthmills to photograph the imposing arch of Blackchurch Rock. This is a shale and sandstone arch which has been separated from the main cliff by coastal erosion. It is a truly impressive structure which can be explored and photographed at low tide. The walk to the rock takes you through Brownsham Wood which was full of bluebells, primroses and wild garlic. 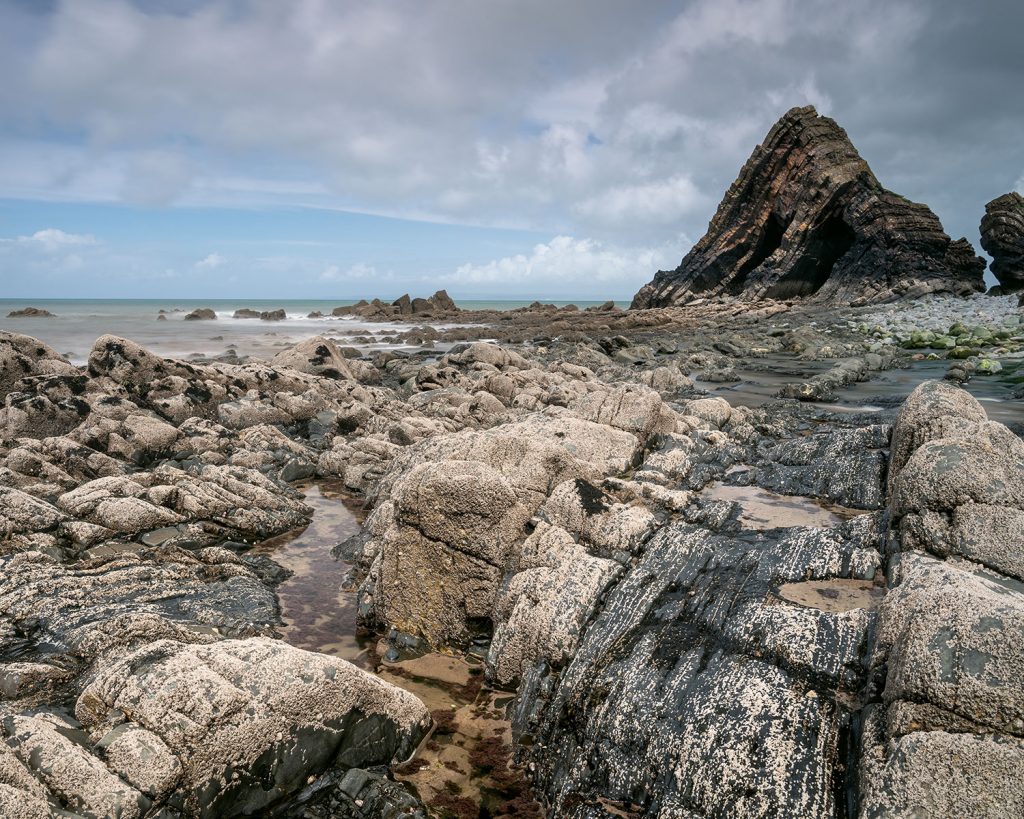 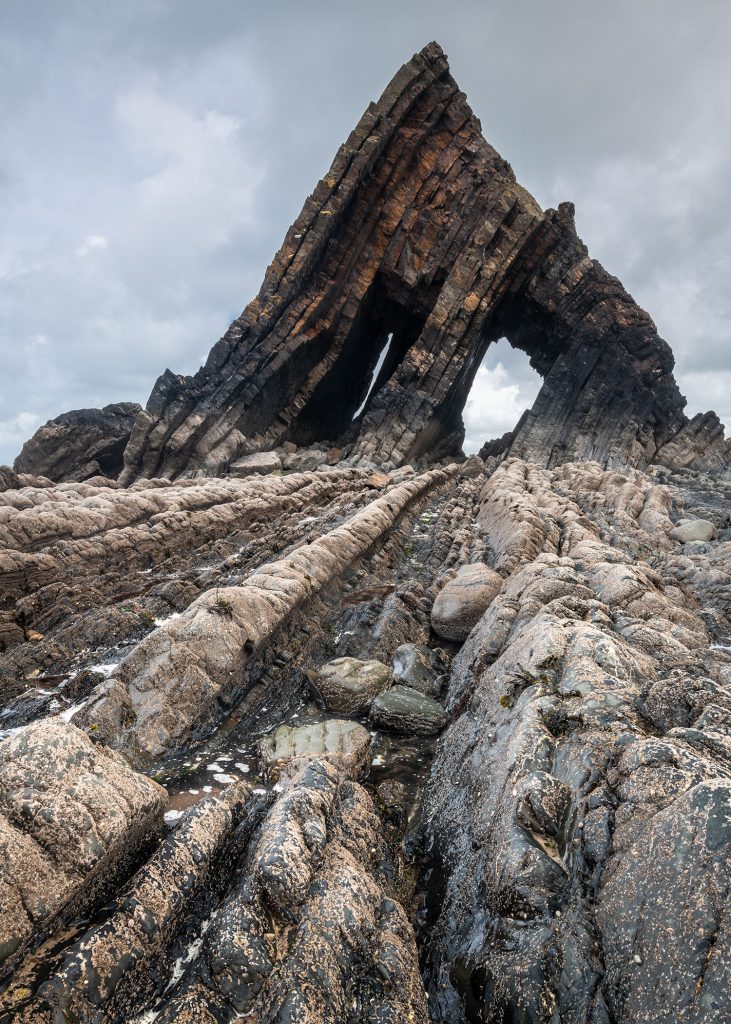 From here we headed into Dartmoor and to a location which I have been wanting to explore for years – Wistmans Wood.

This ancient oakwood is one of only three remote high-altitude oakwoods on Dartmoor. It is only tiny but it has been attracting photographers for some time. My interest in visiting came after seeing Neil Burnells atmospheric collection of images from this location.

We arrived on Dartmoor a few hours before an uncharacteristically fierce storm (for May) which threatened to unleashed 60 mph winds and sideways rain on the moorlands. As a result we had one morning to devote to woodland photography and were up at 3am to get to the woods before the heavens opened. 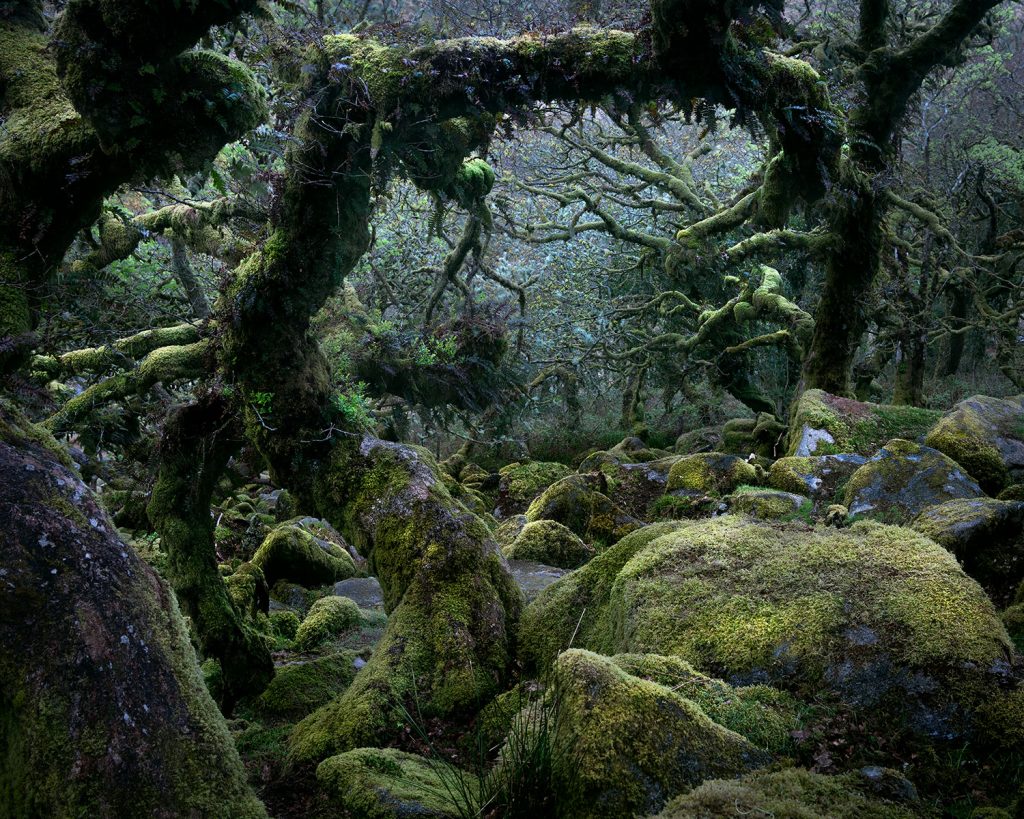 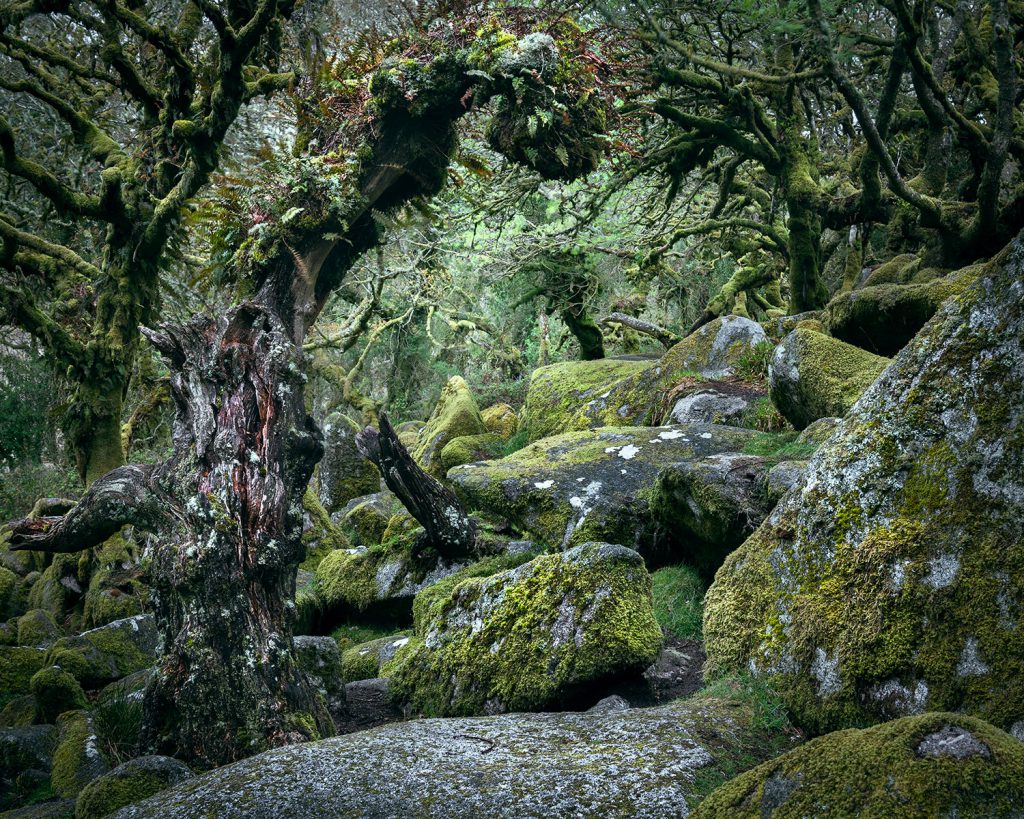 When the storm finally hit and the weather deteriorated we decided to head to the South Coast of Devon where we felt we might be able to make the best use of the inclement weather. Our destination was Bantham beach which is a sandy cover situated opposite Burgh Island. At low tide you can access the neighbouring bay which is full of really interesting rock formations and rock pools. There are some lovely lines of rocks which make good leading lines looking towards Burgh Island and in the opposite direction towards the sea stack on the headland. 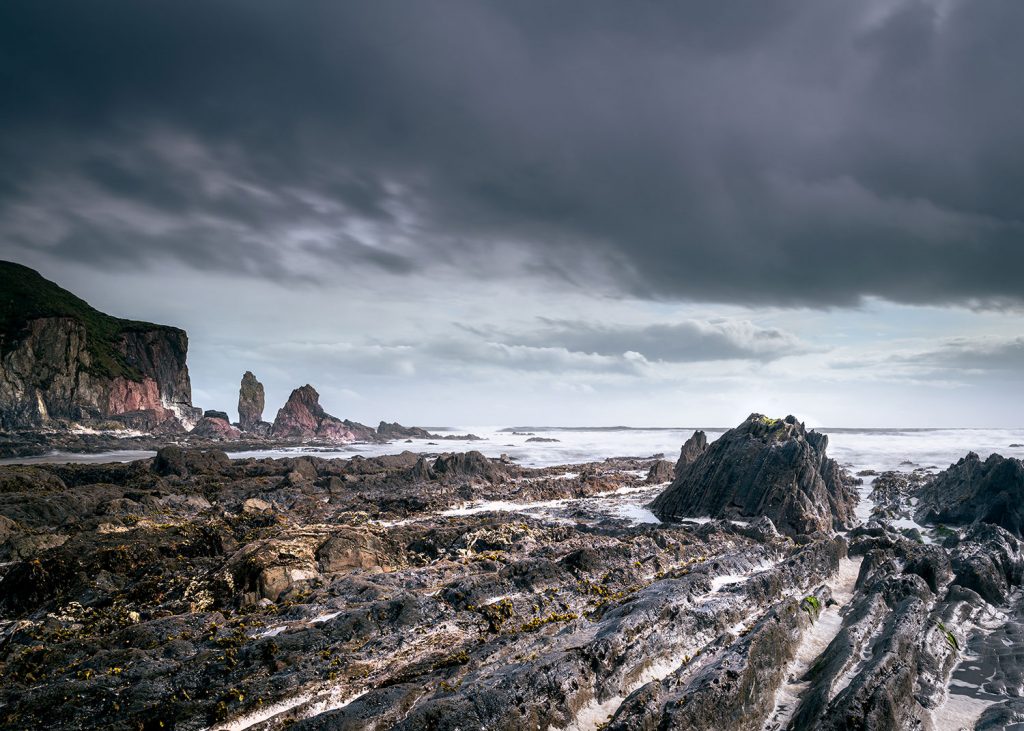 Somerset and Deven contain some beautiful countryside and I am looking forward to exploring them further and running some workshops here in 2022.