So having checked the weather again last night using the Clear Outside App, (which is usually really good) I decided to head for Shingle Street today to capture the predicted sunrise. However when I looked outside this morning I changed my mind and headed for the River Deben at Ramsholt. I had decided to set a theme for todays images which I wanted to be along the lines of ‘whats behind you?’ The idea was to take an initial image and then turn 180 degrees and find a composition in the opposite direction. These would be my two images for the day.

I often find that I head to a location with a specific view in mind and sometimes don’t spend long enough exploring all the other opportunities that are available in the area. Hopefully this challenge would force me to do this.

I arrived at Ramsholt just before sunrise – except the fog was so dense there was no chance of seeing the sun. I parked at the top of the hill and walked down to the river past a beautiful drift of snowdrops, their heads heavy with tiny water droplets left behind by the fog. Ahead a curlew called from the shore, it’s evocative call breaking the stillness of the morning.

Looking around I decided that I wanted to capture a view of the Ramsholt Arms on a misty winters morning with a few dinghies in the foreground – a pretty typical shot for this location and one I have taken several times before. There was a white dinghy at the top of the slip and I felt this would sit nicely in the foreground of my image with the sweep of the bay leading the eye around past the pub. I loved the way the fog enveloped the tops of the trees and the rivers edge disappeared into the distance. This shot was taken with my 24-70mm lens at 24mm, 3 seconds at F14. 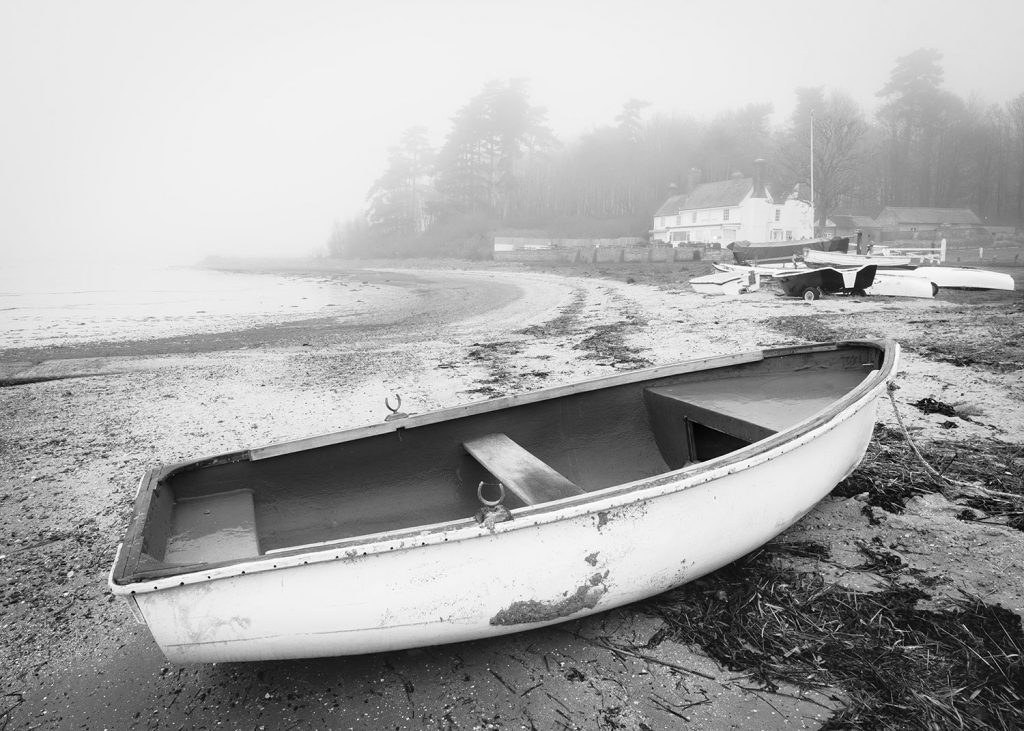 Having captured my first image I turned 180 degrees and went in search of my second composition. I was initially attracted to some patterns in the mud but I couldn’t get a good angle on them from the Quay and I didn’t fancy an early morning mud bath so I headed along the rivers edge a short distance. Nestled in the reeds was the harbourmasters sailing boat which I thought might make a good composition. I settled for a low viewpoint to obscure a couple of boats on their moorings behind and changed my lens to a 14-24mm. The image was shot at 17mm, 1/10 second at F14.

I decided to process both images in black and white as I felt this suited the conditions better than colour. I don’t often process in black and white so this made a nice change. Because of the foggy conditions I tried to keep the images feeling light and airy and reduced the clarity on both shots while using some of the foreground details to darken the edges a little and focus the eye into the middle.

Unsurprisingly there was no one else around at 6.30am and I had the river to myself, which is one of the best parts of early morning photography. It can often be a struggle getting up for sunrise, especially in the summer, but I have never regretted going out. Just a short while in the natural world is enough to keep me grounded and there is always something to photograph even when conditions aren’t ideal.