There weather forecast promised a sunrise today so I headed out at 5am to see how obliging Mother Nature would be. I decided to head to Waldringfield as it is somewhere I haven’t been for a while and I love the River Deben.

I arrived about 5.30am and walked down the hill to the river. The scene in front of me was perfectly still, with some mist hanging over the water. There were a few boats on the moorings and a scattering of dinghies on the beach. I set about looking for some compositions but only had 10 minutes before the sun rose so I had to work quickly.

My first composition used a group of five yachts on the river with the channels in the mud as a foreground. I then focused in on three of these boats for something a bit more tranquil looking. 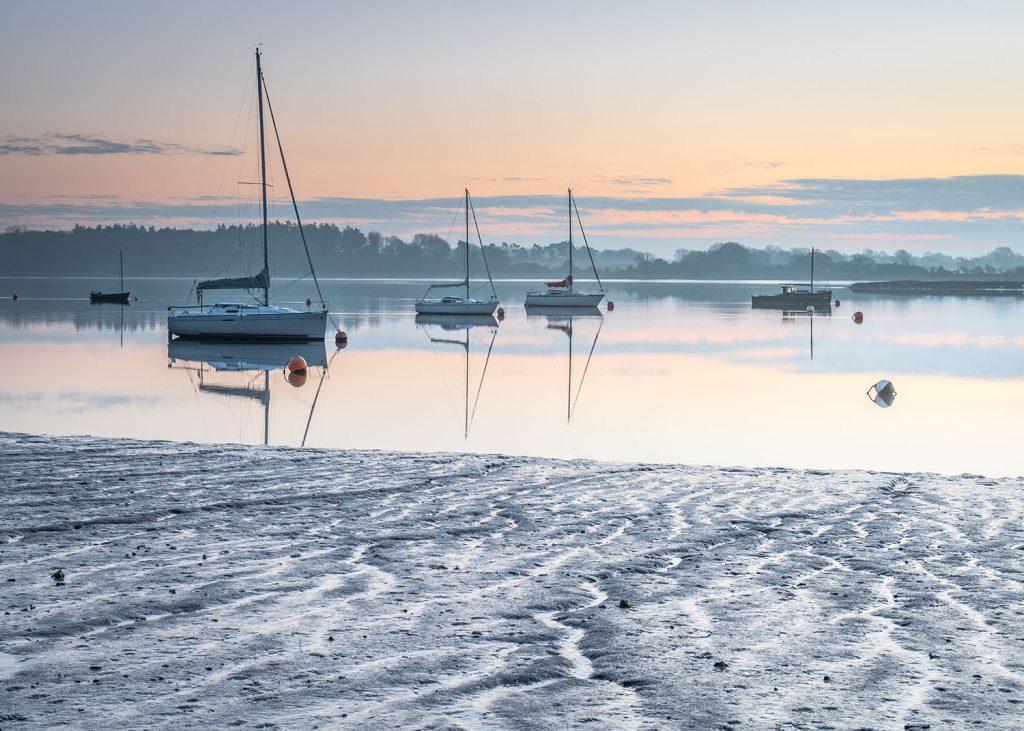 Walking down to the slipway in front of the sailing club I found an upturned dinghy with some beautifully faded paintwork. The colours seemed to compliment the sky so I used this a a foreground to my next shot pointing down the river. I took the same shot again but without the dinghy which gave the resulting images a completely different mood. 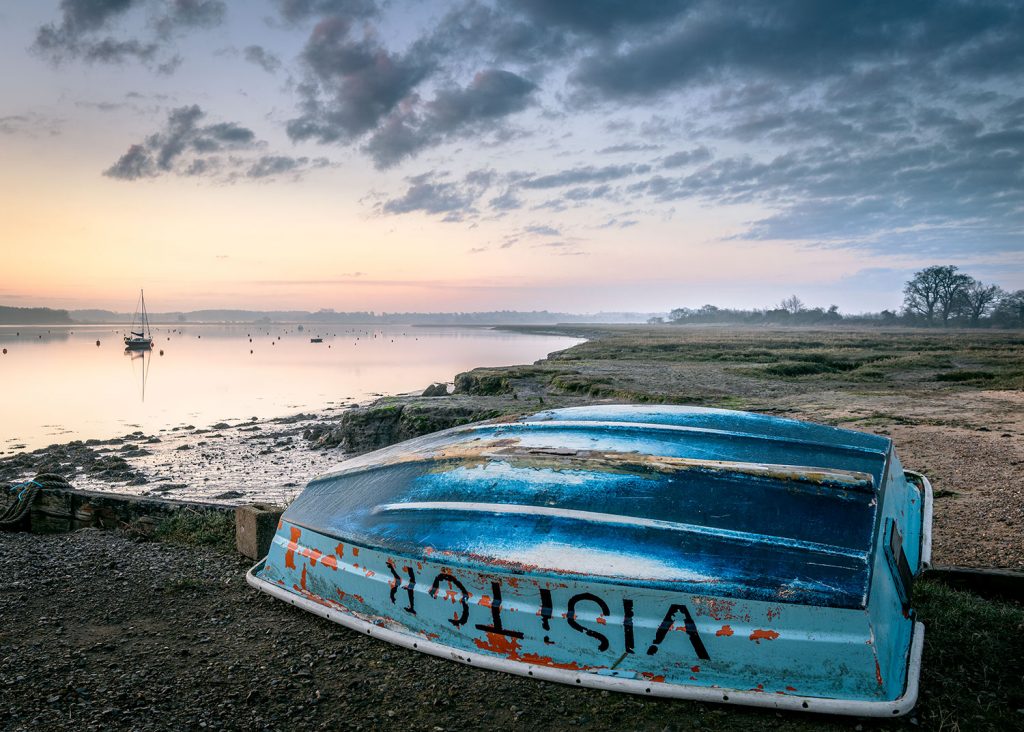 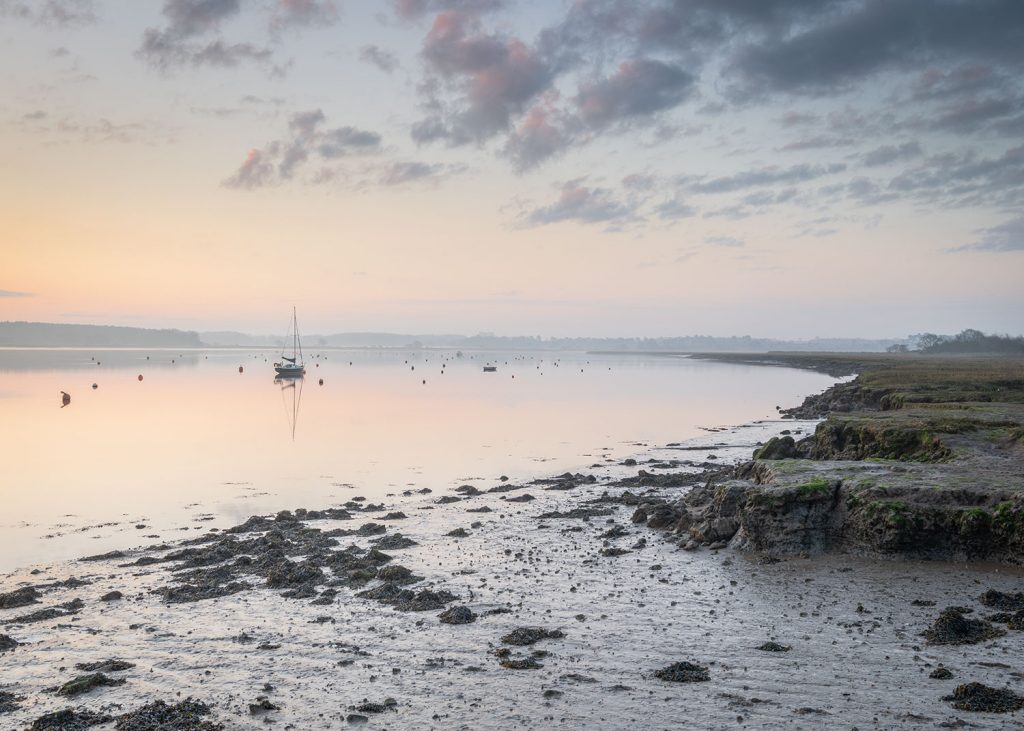 Just above the slipway I found these brightly coloured floats which I thought made a good foreground to the river looking in the opposite direction. 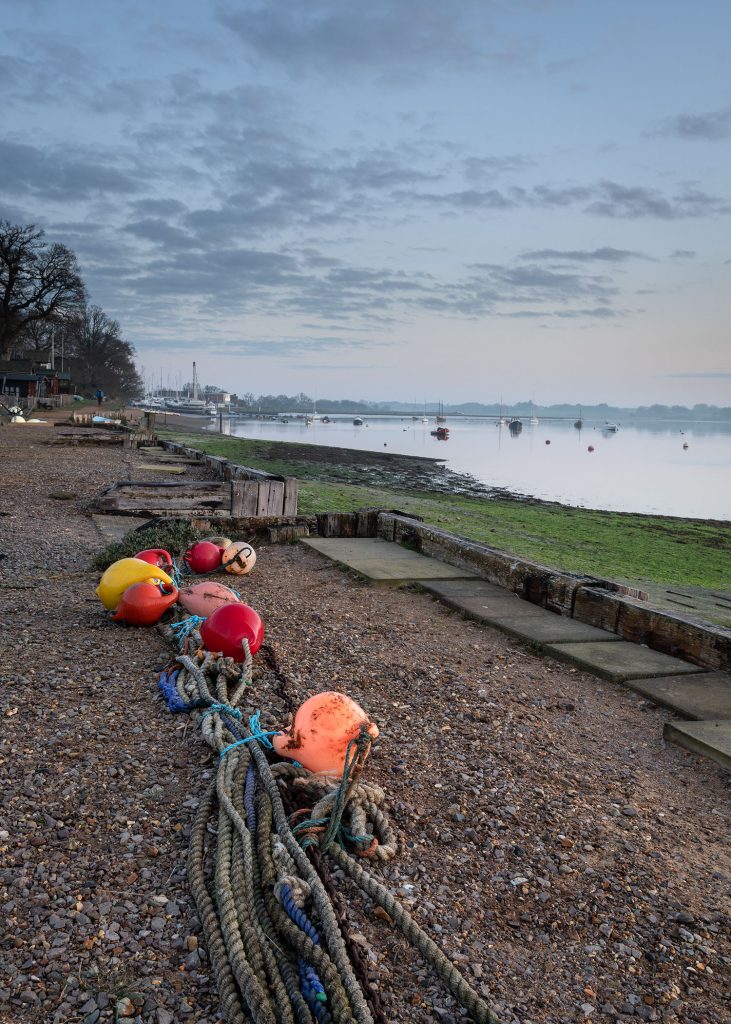 It was now about 5.40am and I was joined on the beach by the Waldringfield swimmers who all headed into the tranquil (but freezing) waters for a sunrise swim. 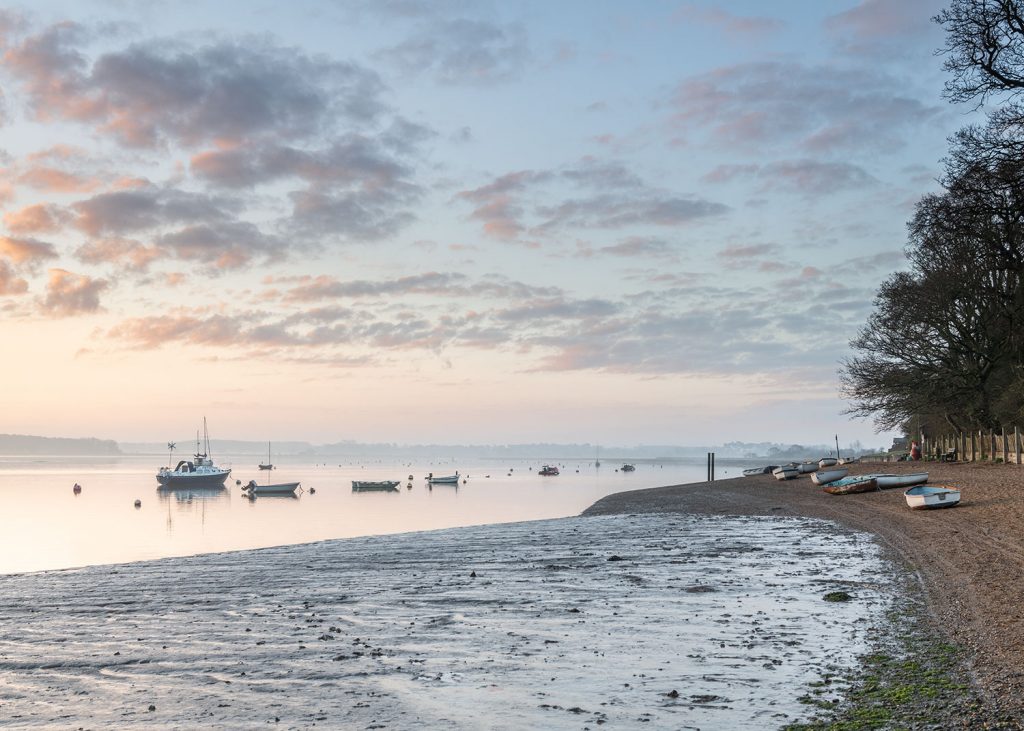 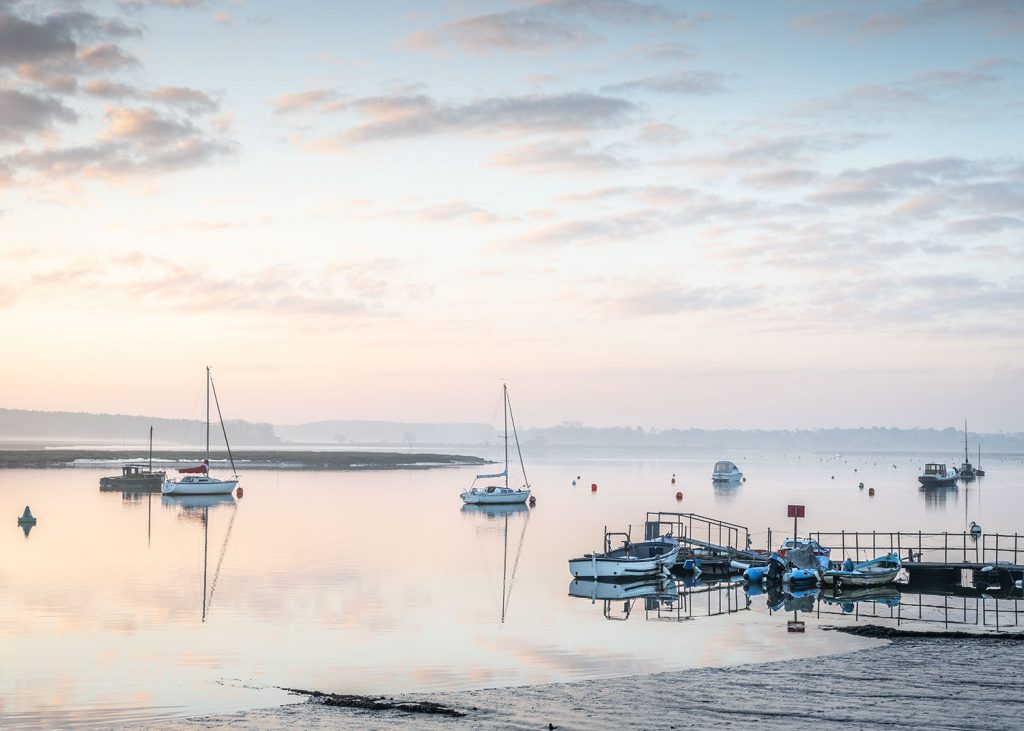 As the sun poked its head above the horizon I headed off along the river wall in the direction of Woodbridge in search of some different shots. 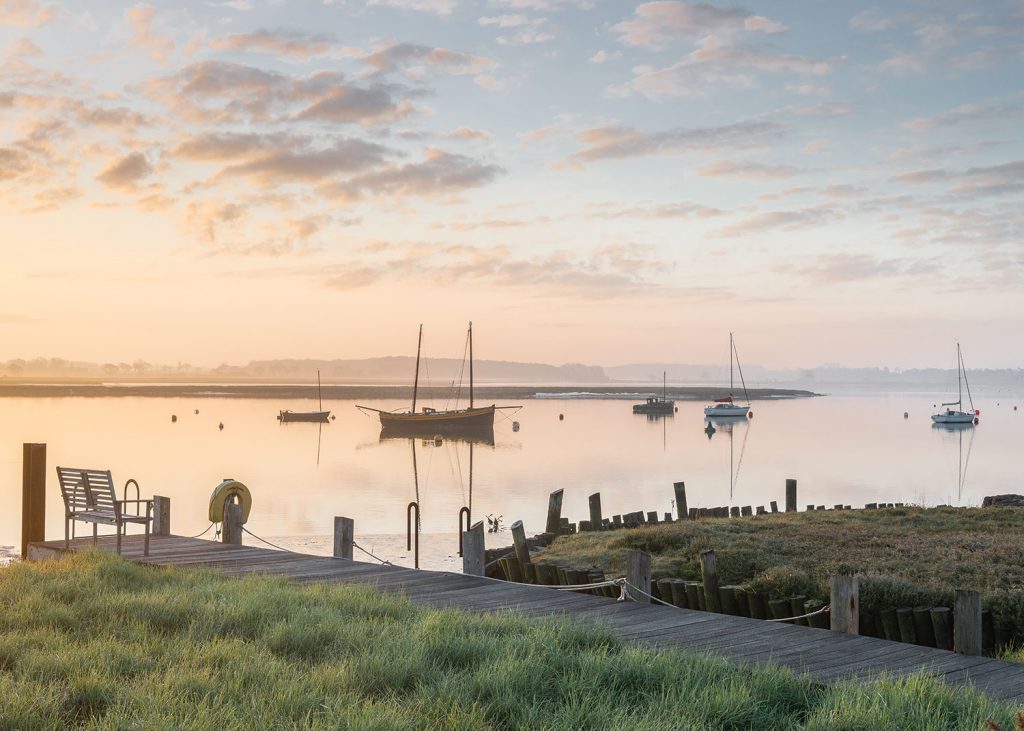 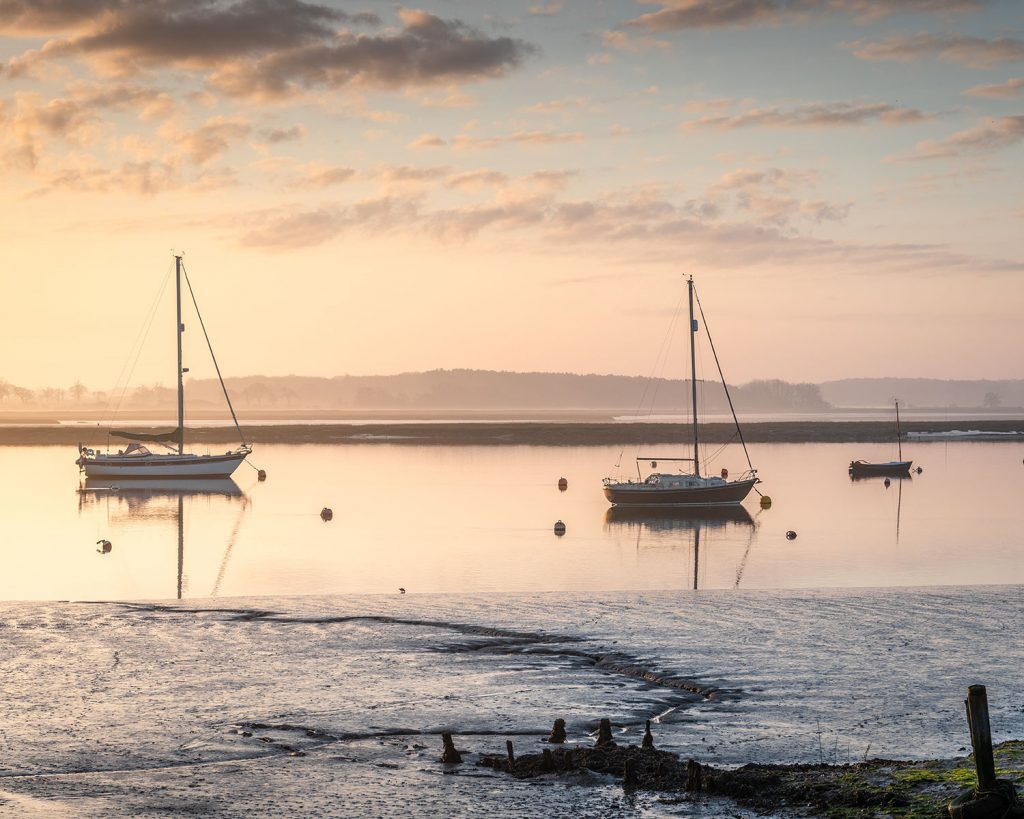 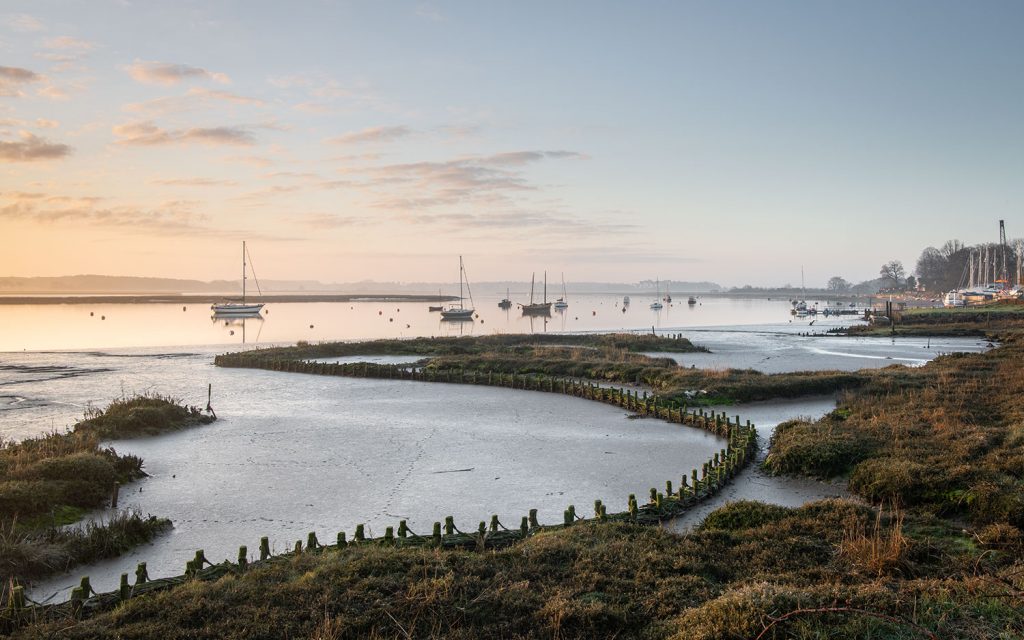 Just along from the boatyard there is a freshwater wetland reserve which was created during the upgrade of the river wall and which is dedicated to the Reverend John Waller who’s trust provided the land. It is a lovely peaceful place, with no public access, but you can sit on the river wall and watch the ducks on the water. This morning the mist hung over the lake as the reeds glinted in the early morning sunshine. 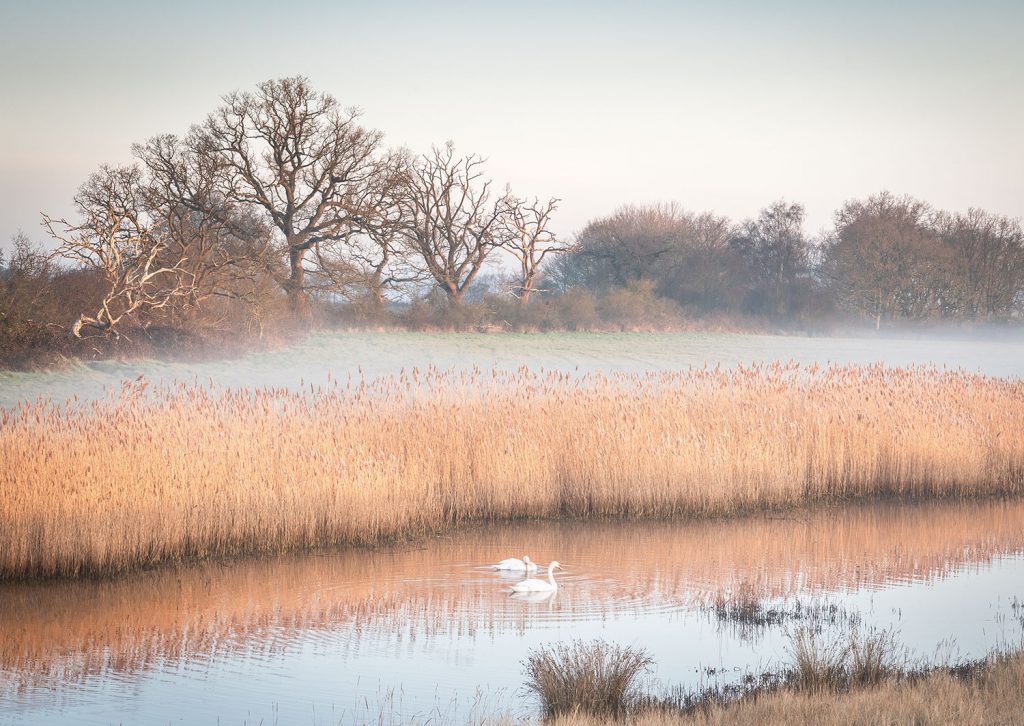 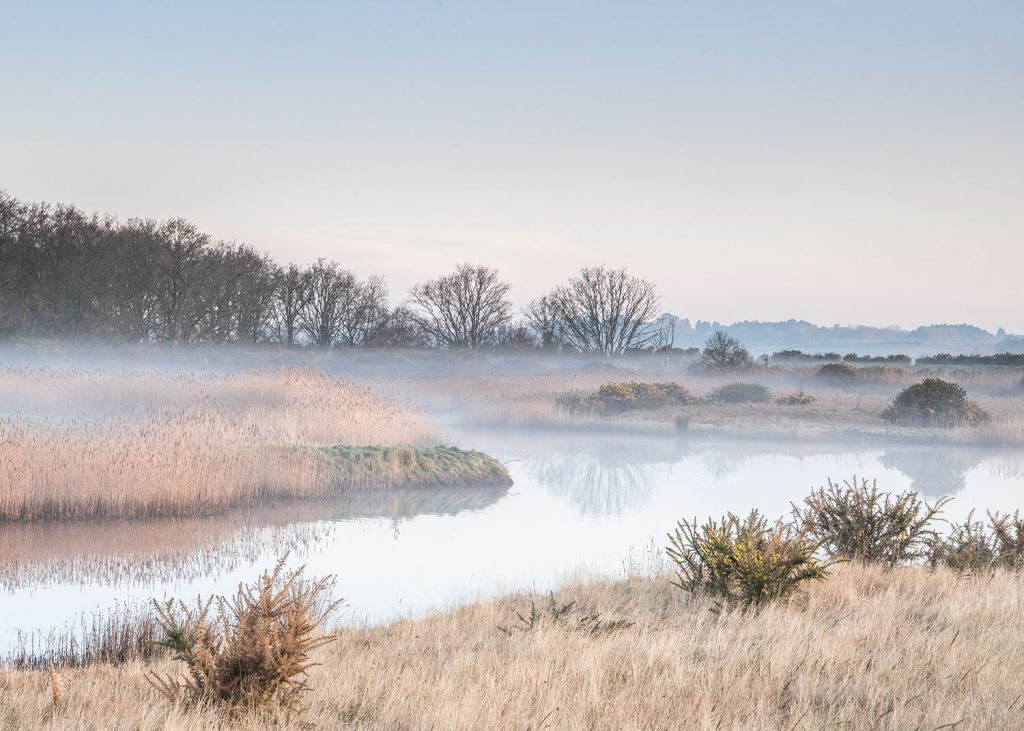 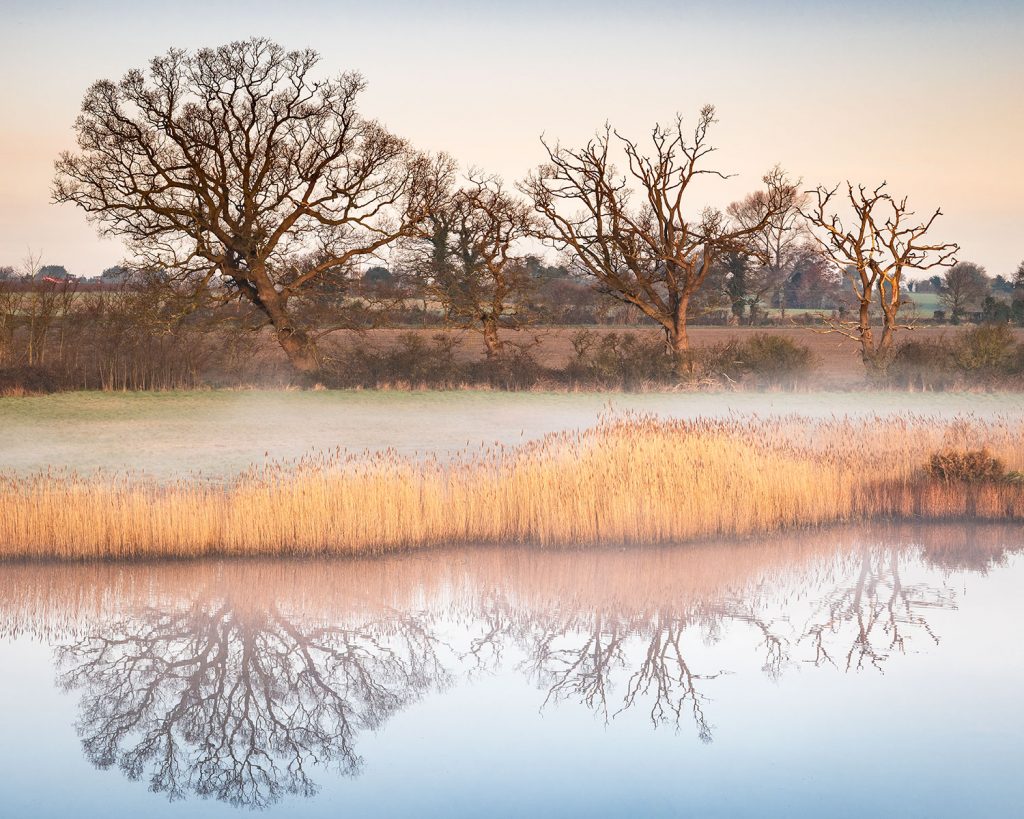 Walking past the wetlands I eventually came to an old jetty which heads out into the salt marsh towards the river. The tide wasn’t quite in far enough to reach the structure but it looked quite attractive in the early morning light. 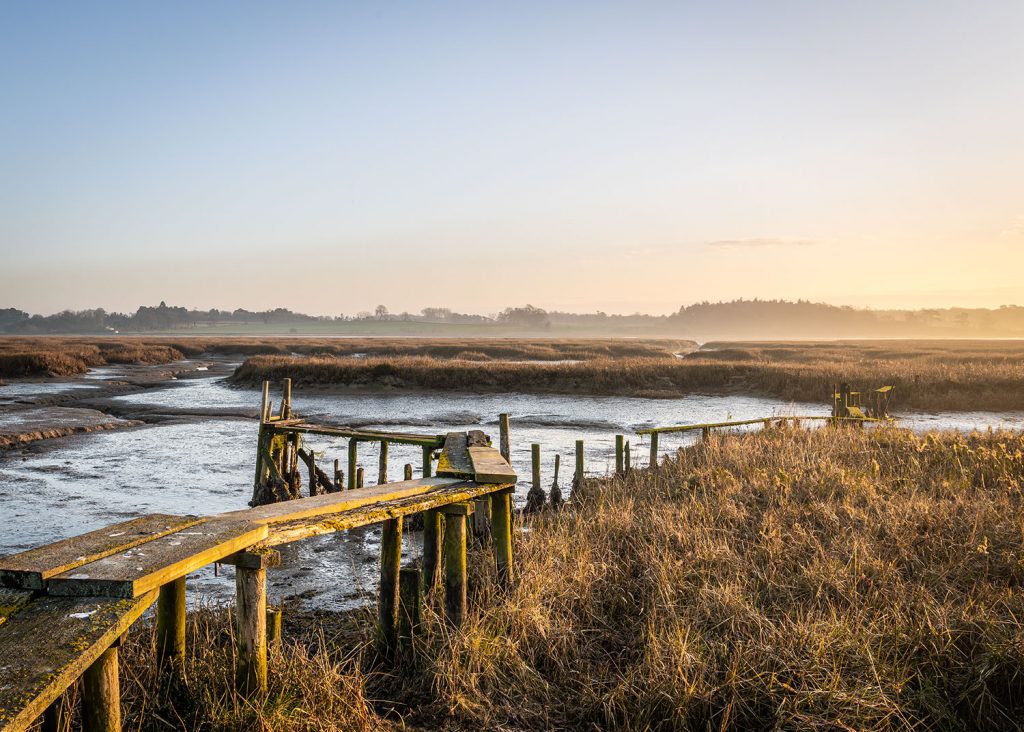 I decided to change my lens and replaced my 24-70mm lens with my 70-200mm and headed back towards Waldringfield. I thought it would be interesting to get an alternative view on the path I had just walked with a telephoto lens. 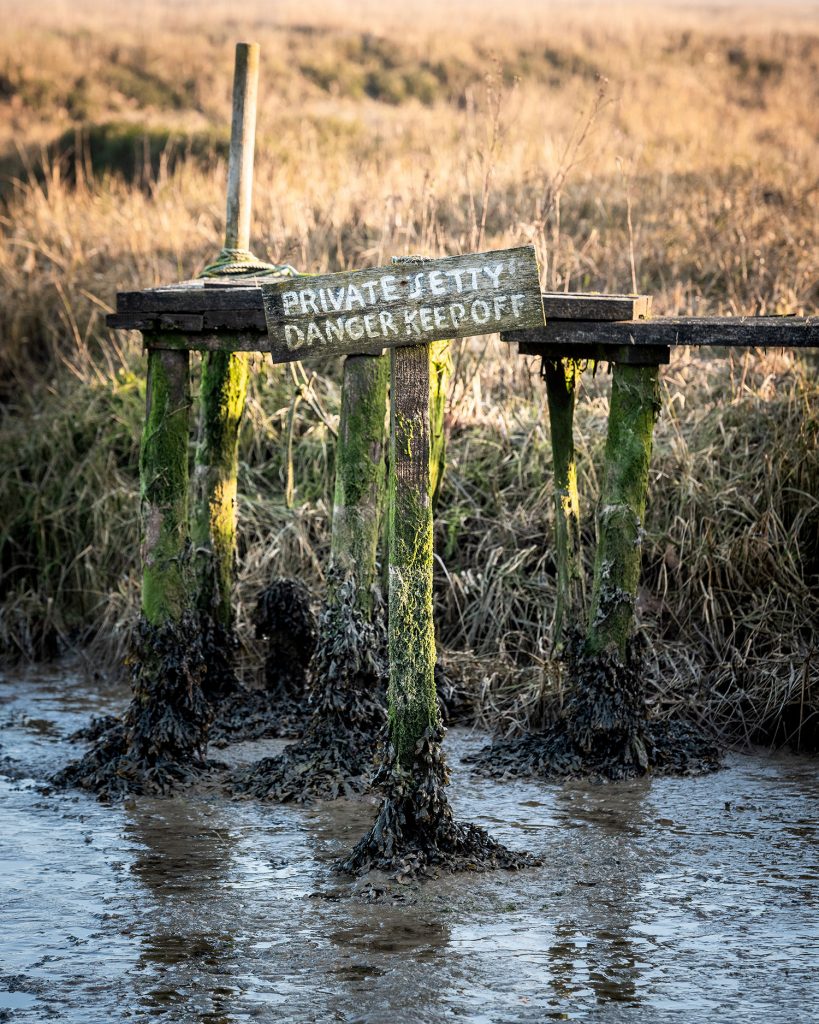 Across the river I could just make out the cottage at Methersgate Quay. 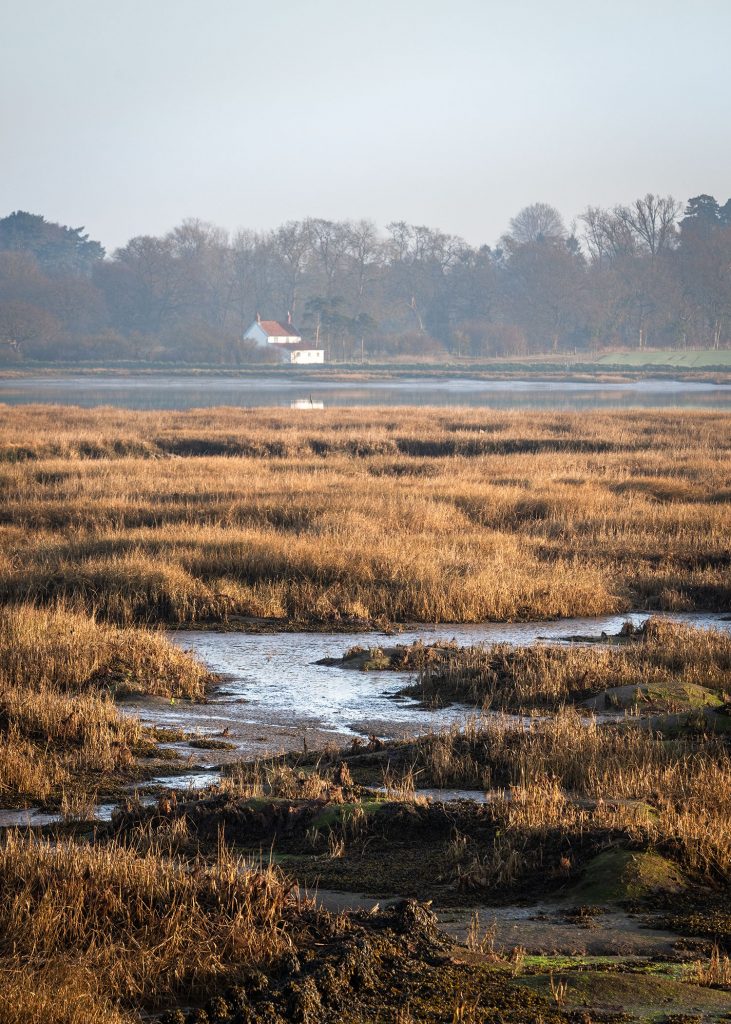 Looking across the river I was shooting directly into the sun but I quite liked the misty high key effect this produced and thought it worked well in black and white. 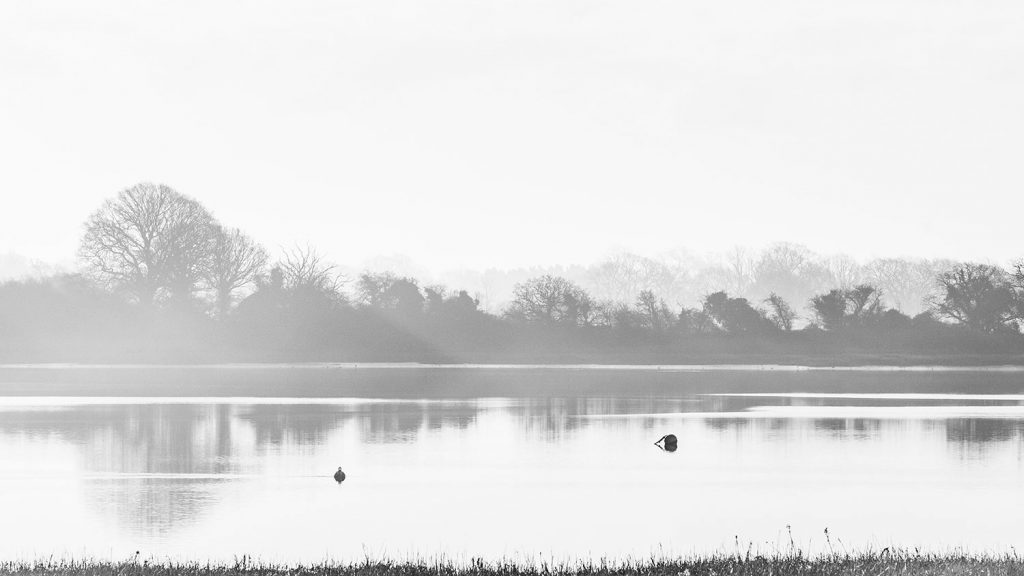 As I walked back past the ponds I was able to focus in on the reeds and the reflections on the water. 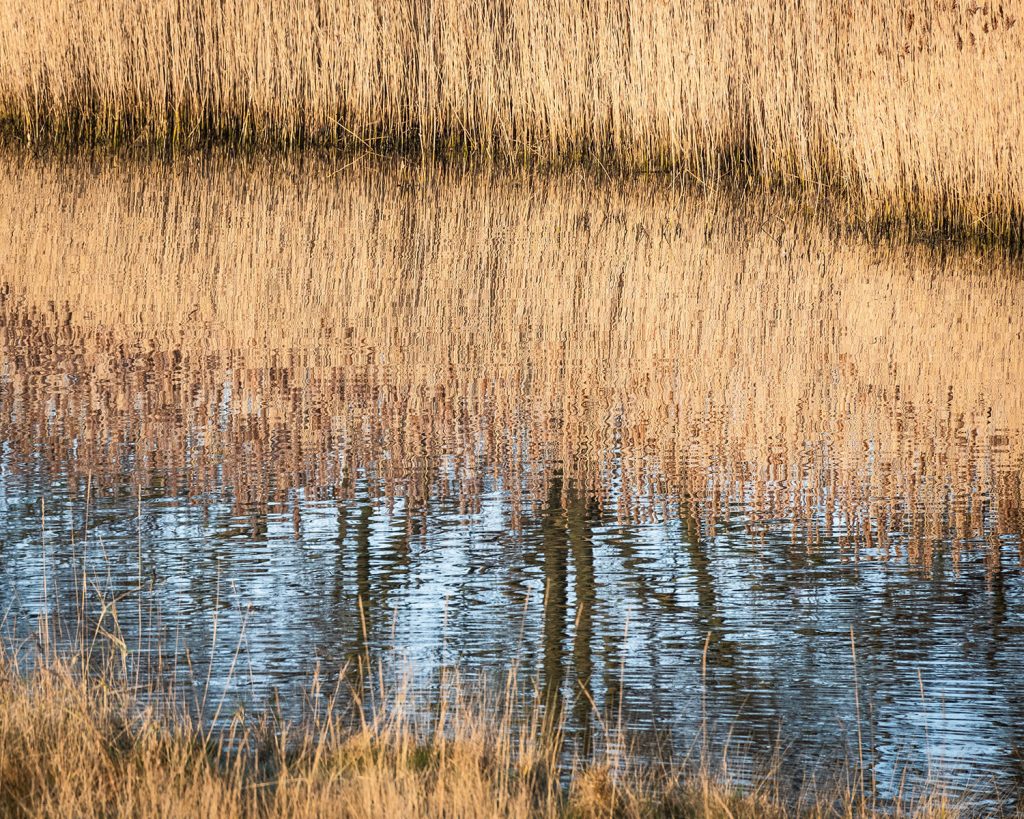 I thought some of the tiny channels in the mud made interesting compositions and I liked the soft light that was glinting off the surface of the wet mud. 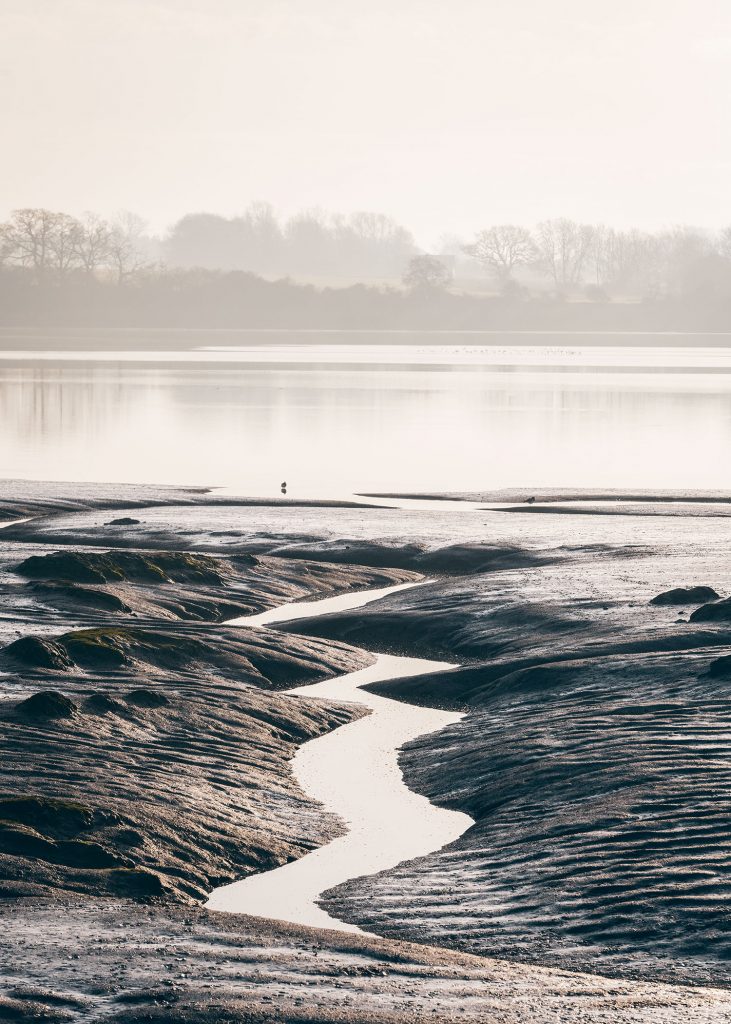 Back at Waldringfield I took a couple of small scenes of the side of the pub and across the boatyard where all the boats were standing on the hard. 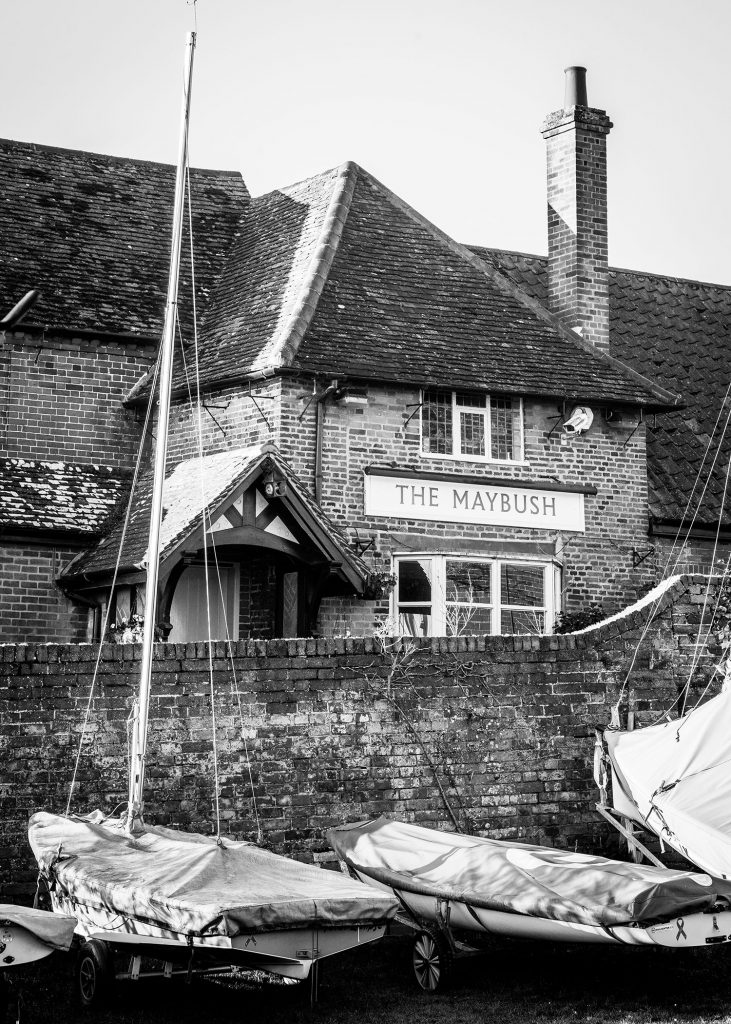 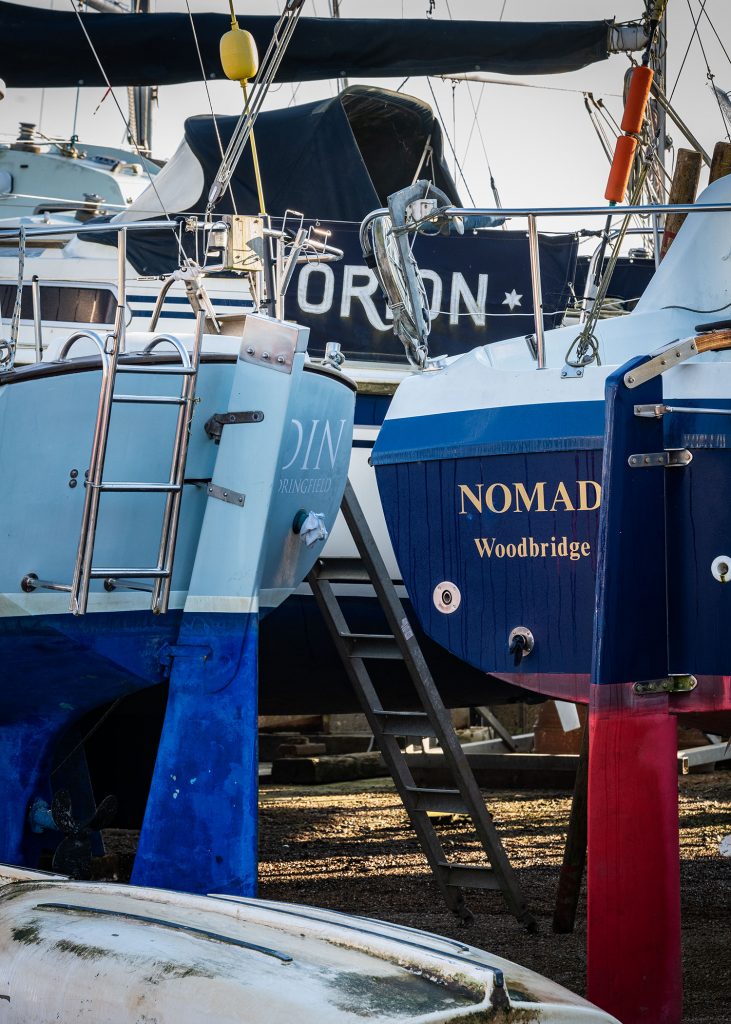 I then went back to the beach and spent a little while focusing in on some of the boats that were moored offshore. The river was still really still and there were sone lovely reflections looking back along the waters edge. 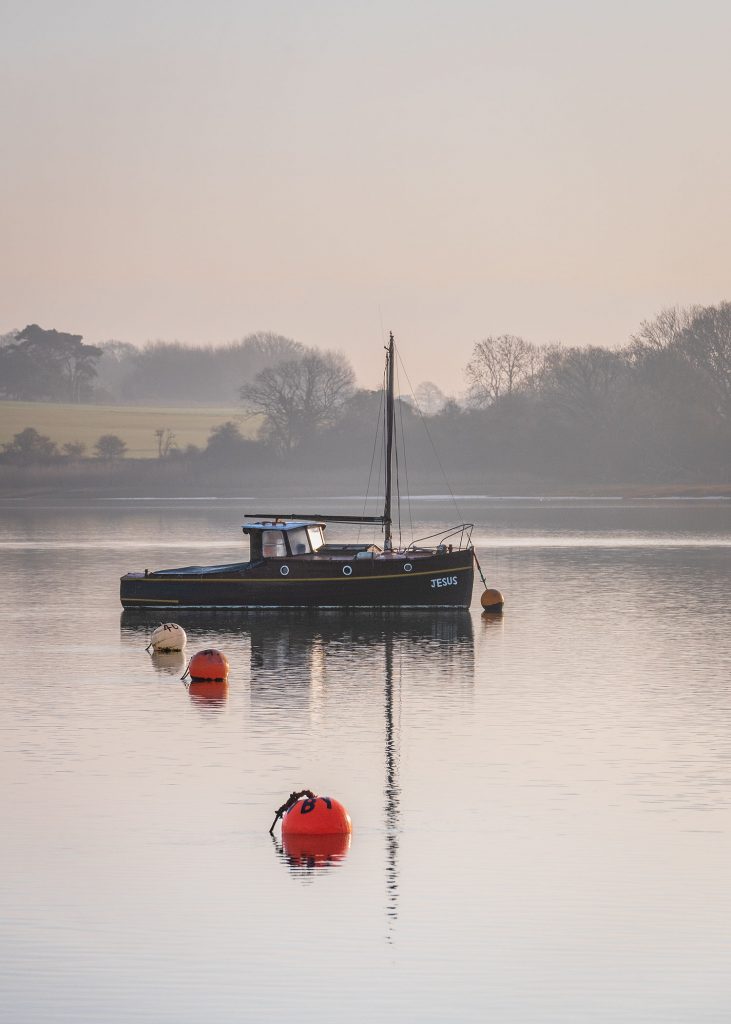 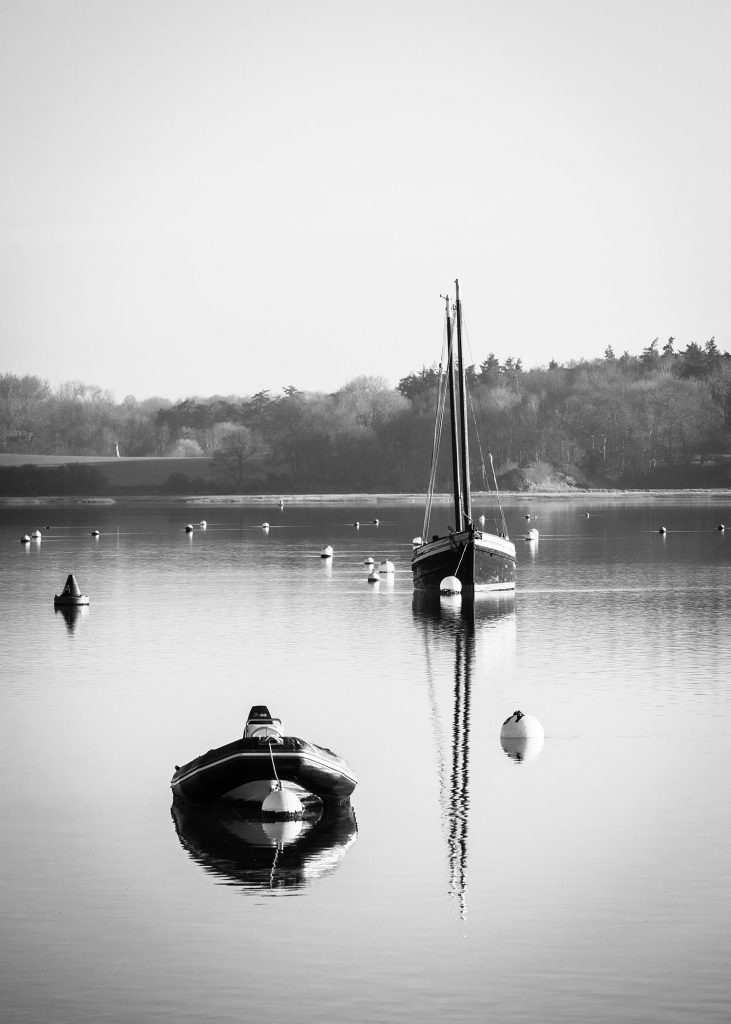 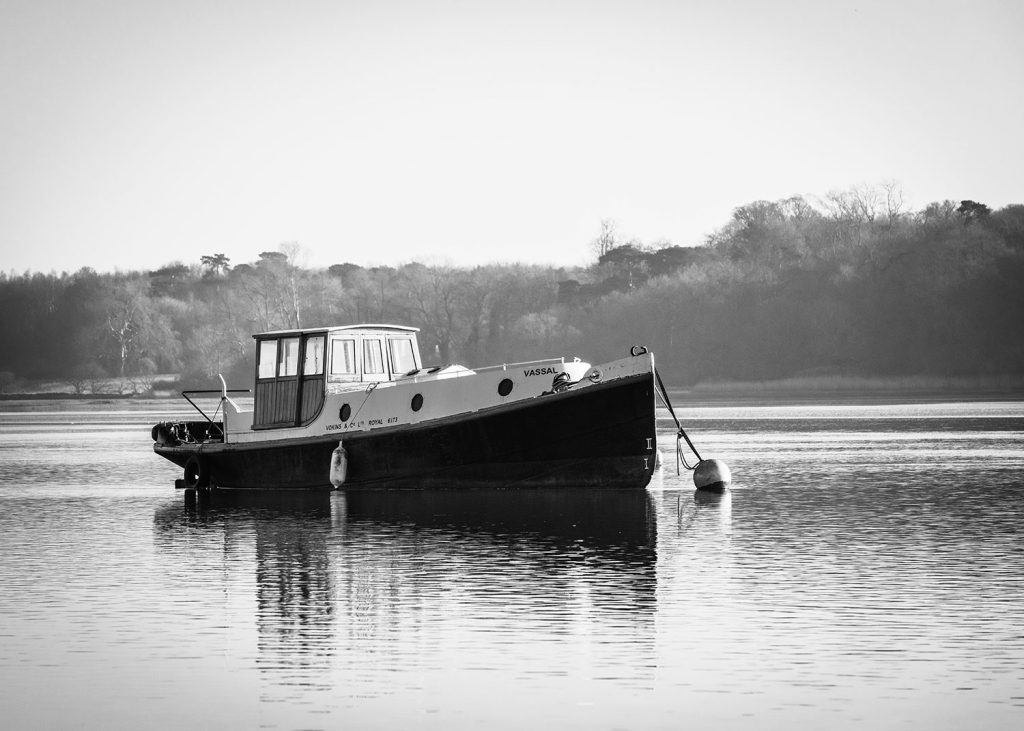 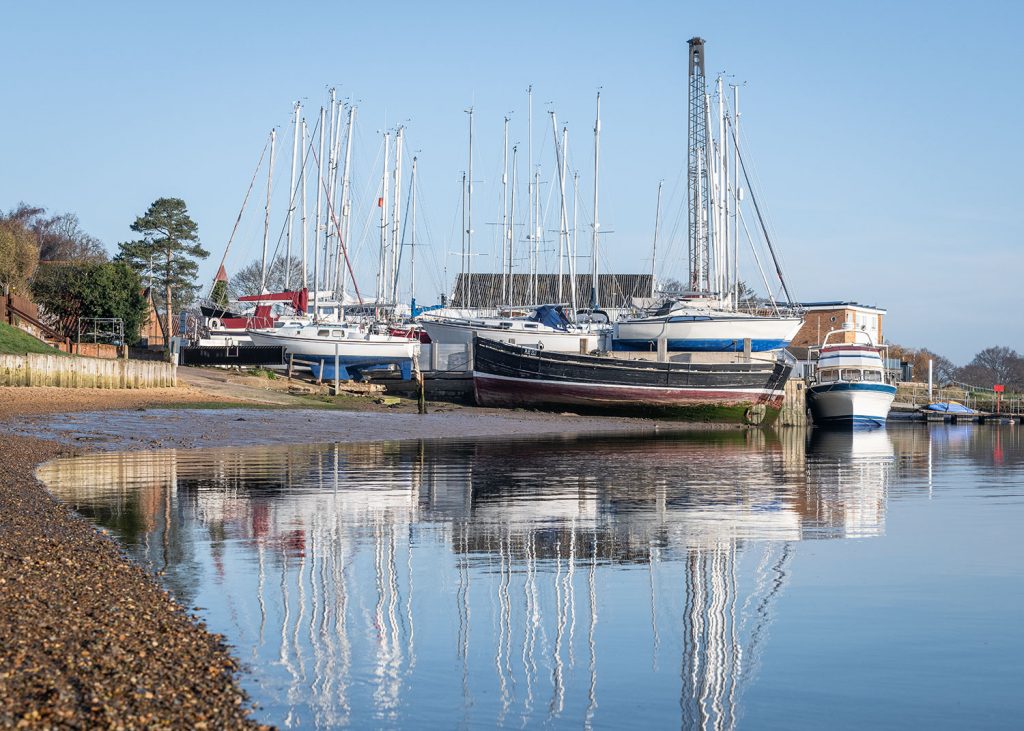 My trip to Waldringfield was probably my favourite morning out since I started this challenge. The sunrise sky was pretty, the mist on the water was beautiful and the chiff chaffs were singing in the woods behind the sailing club and it really felt like spring had finally arrived.