For my challenge images today I decided to split my shots between two locations on opposite banks of the River Orwell – the Freston shoreline on the west side and the Nacton shore on the opposite bank.

I have never really spent much time at Freston so it seemed like a good place to start the day. I parked in the lay-by on Freston hill and took the track down to Stoke Sailing Club where I could access the shoreline in front of Freston tower.  The tide was on its way out but was still high enough to add some interest to my first images. I spent a little time around the slipway photographing the boats on their moorings and the shells on the beach.

It was a beautiful spring day and the river was alive with the sounds of oystercatchers and curlew. The distinctive call of a chiff chaff echoed from the trees behind the sailing club and a peacock butterfly flitted around in the sunshine.

For my pictures today I used a mix of colour and black and white to suit the mood I wanted to convey. 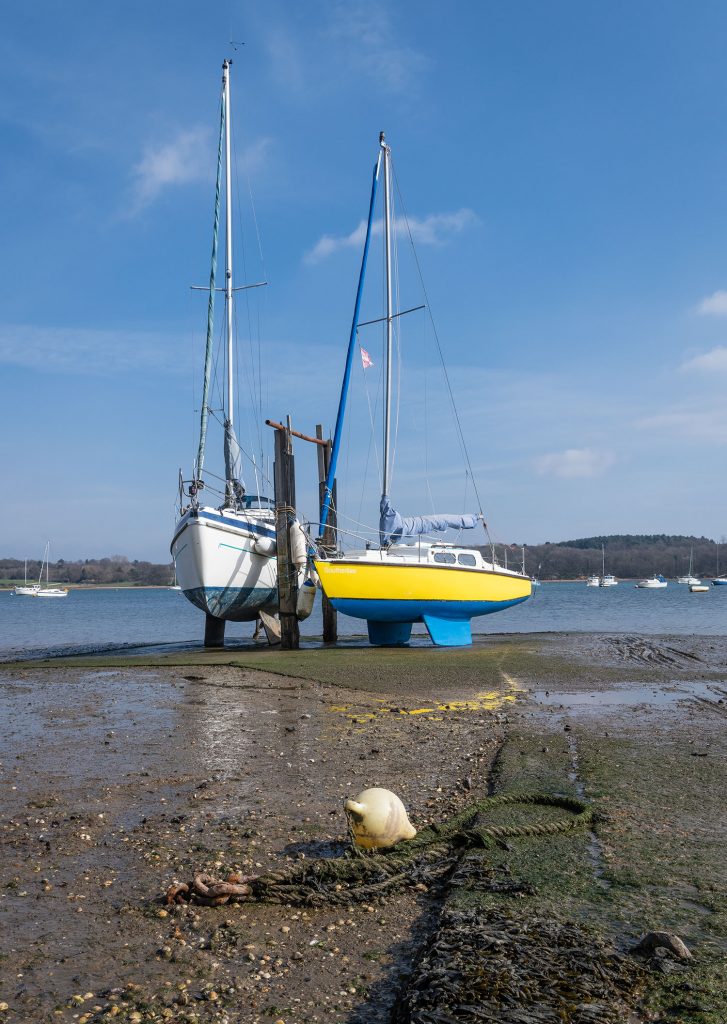 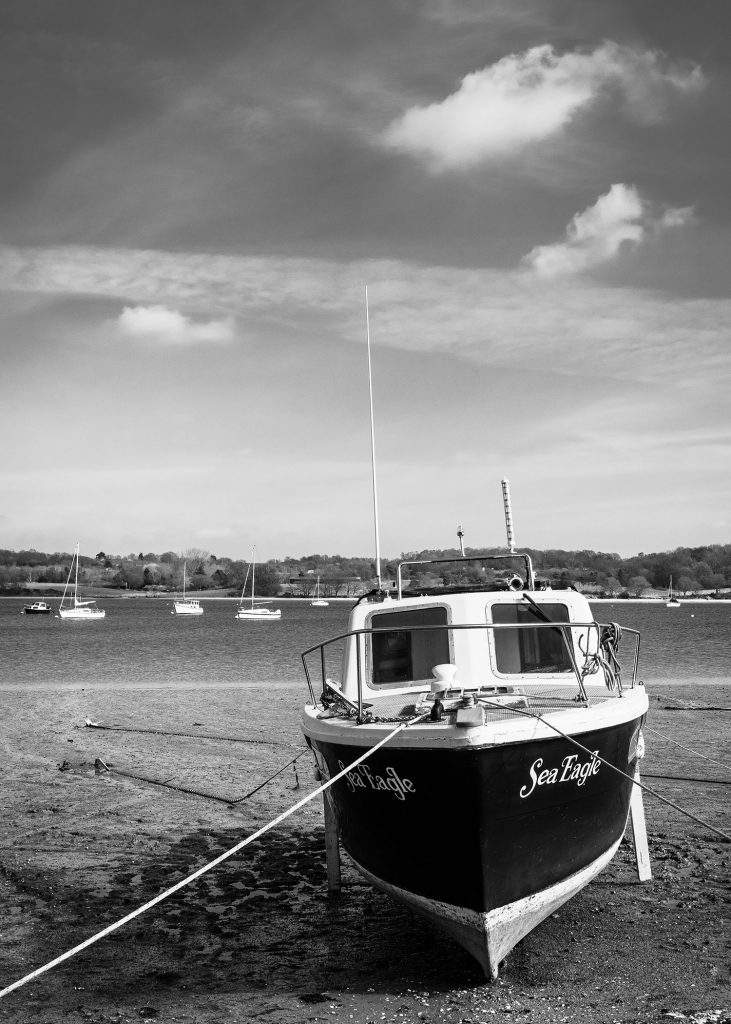 There are a few metal chains anchored into the beach in front of the sailing club and in front of this one I found an oyster shell. 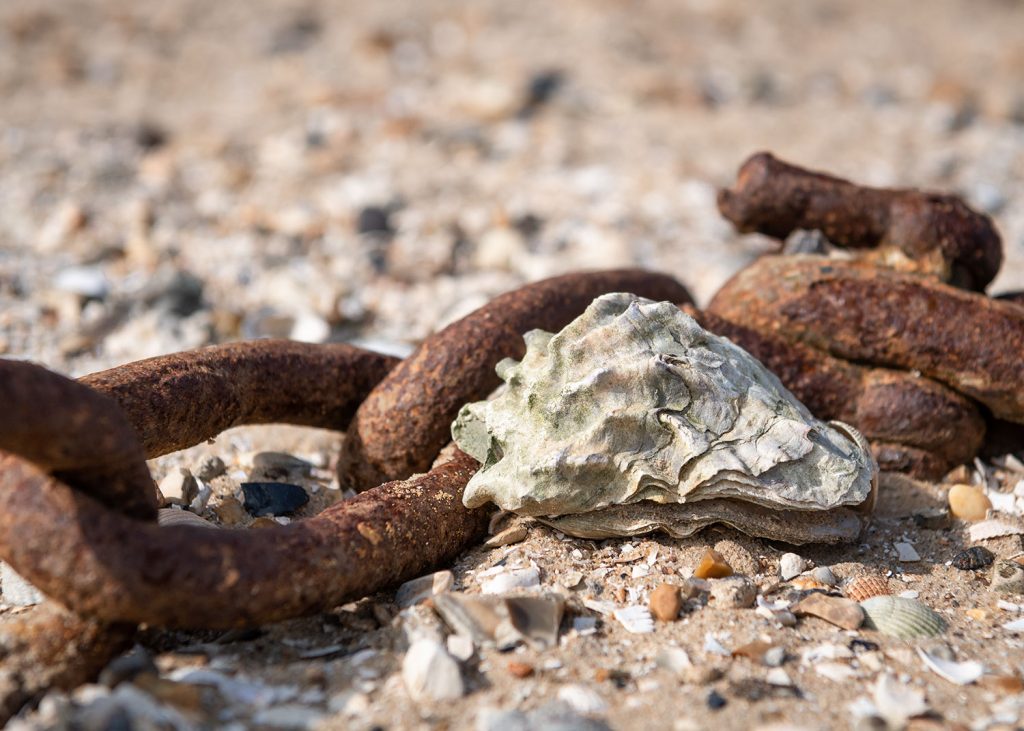 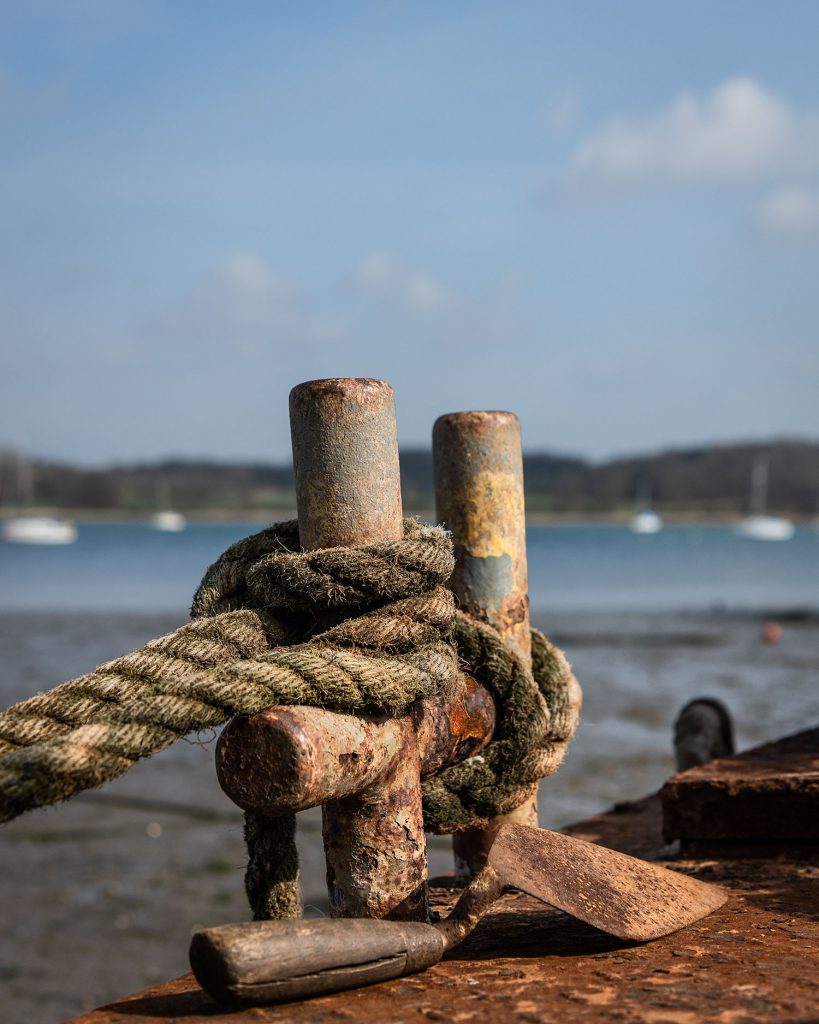 The old posts to the right of the sailing club are a familiar sight to photographers and have been used in many high tide images from this location. 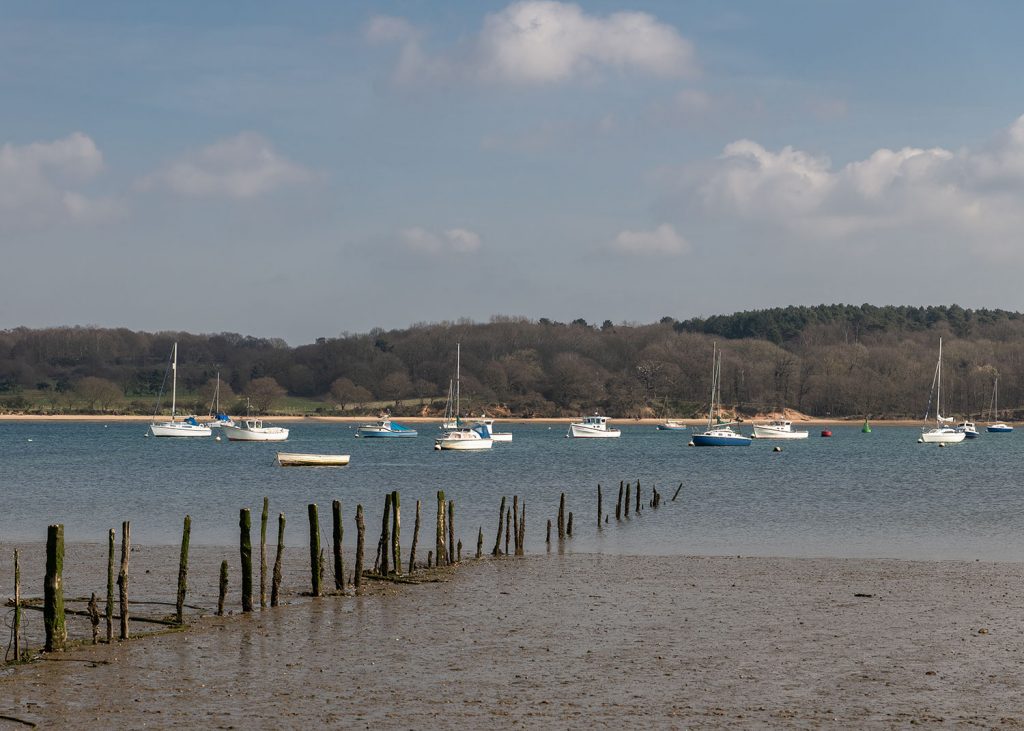 As I walked along the shore line in Freston Park I came across a couple of lovely old trees growing on the edge of the parkland. 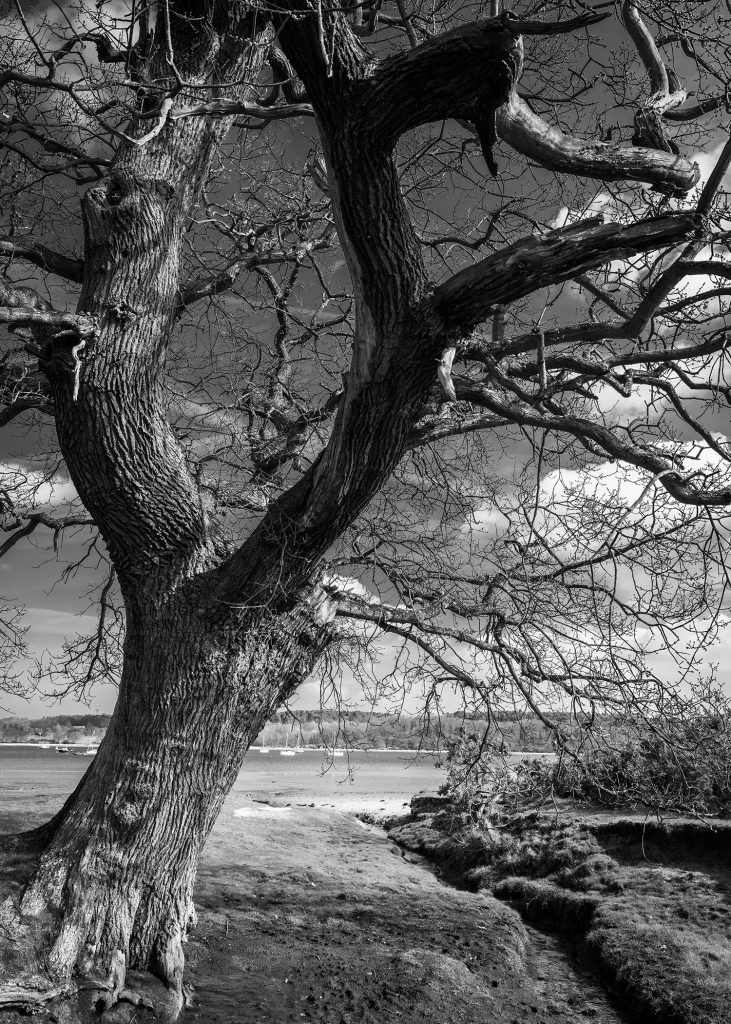 The sandy beach is backed by a grassy foreshore which is gradually eroding away. The landscape here is scattered with shallow pools backed by sedge grasses and bullrushes. 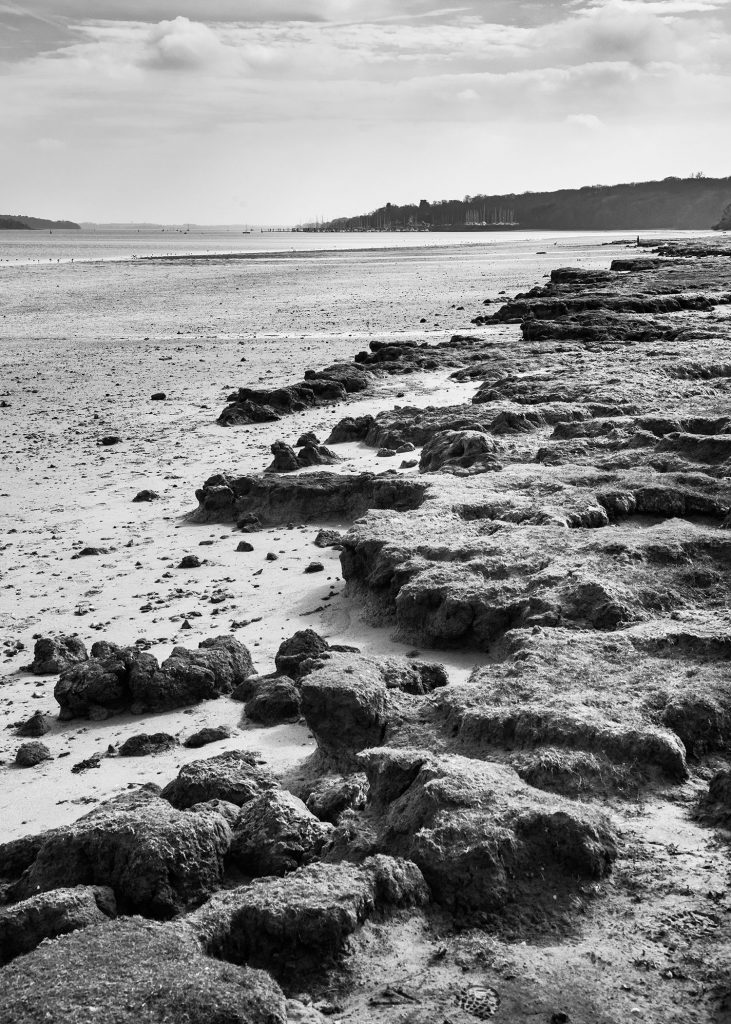 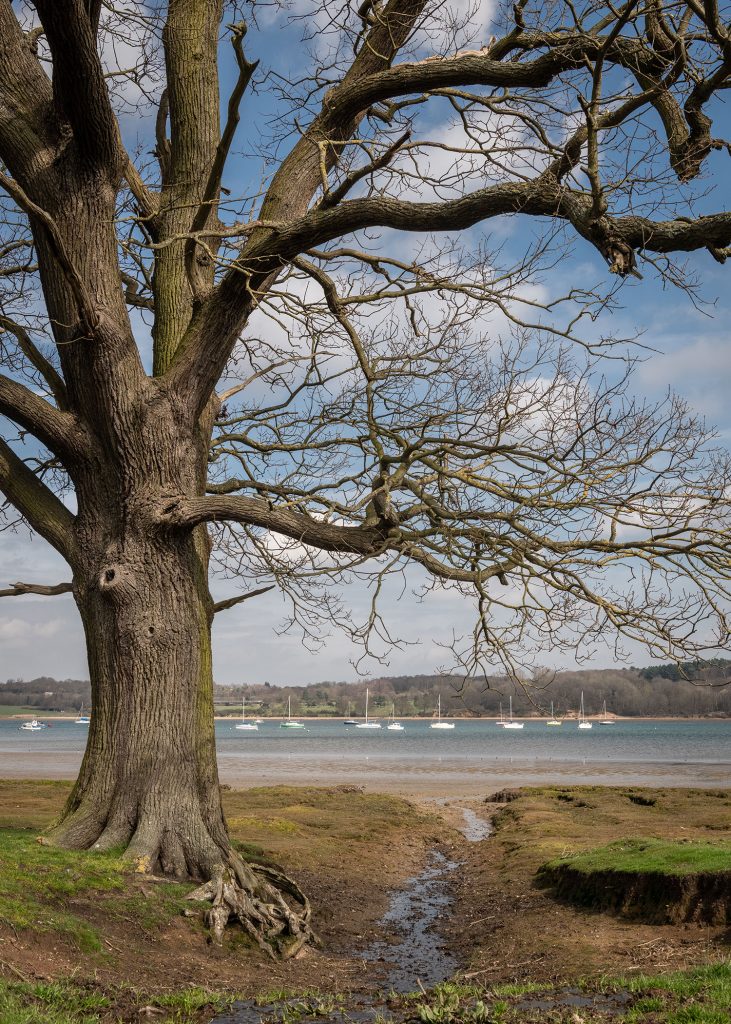 On the hill overlooking the river stands Freston Tower, a six-storey red brick Tudor folly. It is not known exactly when and by whom this was built but it is thought to date back to approximately 1578. It is currently owned by the Landmark Trust and is available to rent as holiday accommodation. 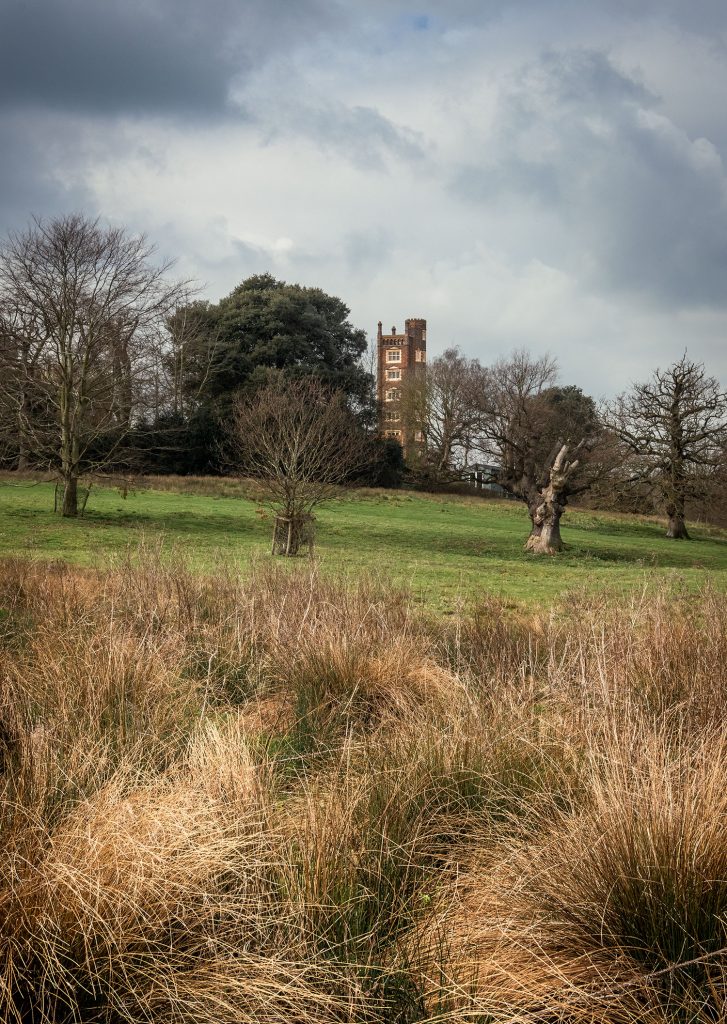 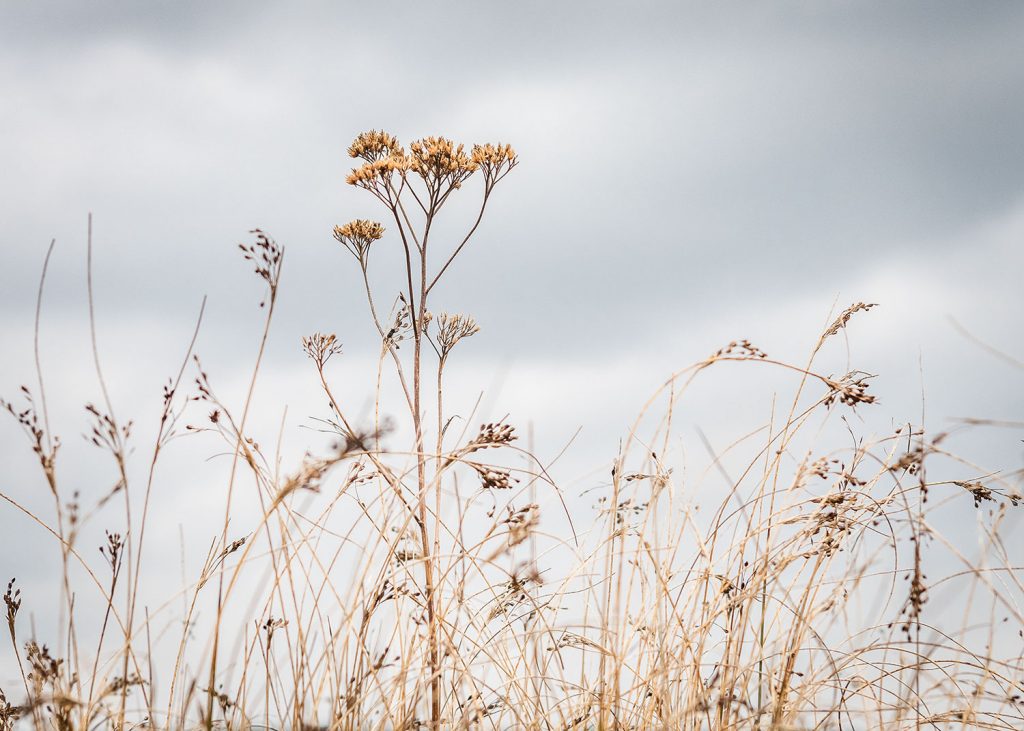 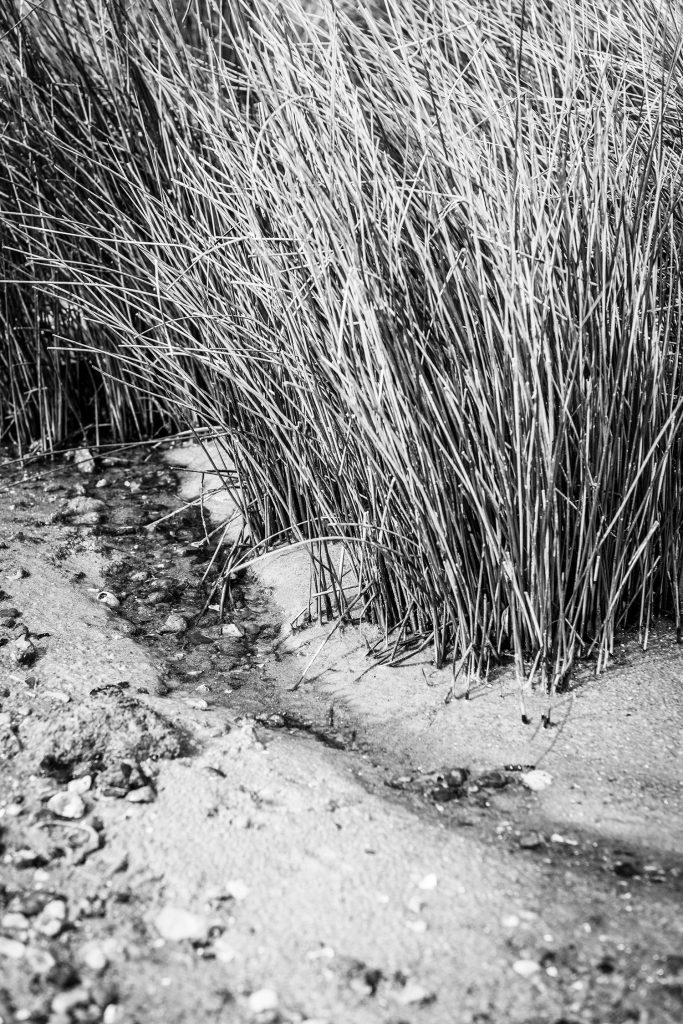 A little further along just before the bend in the river lies Woolverstone marina. 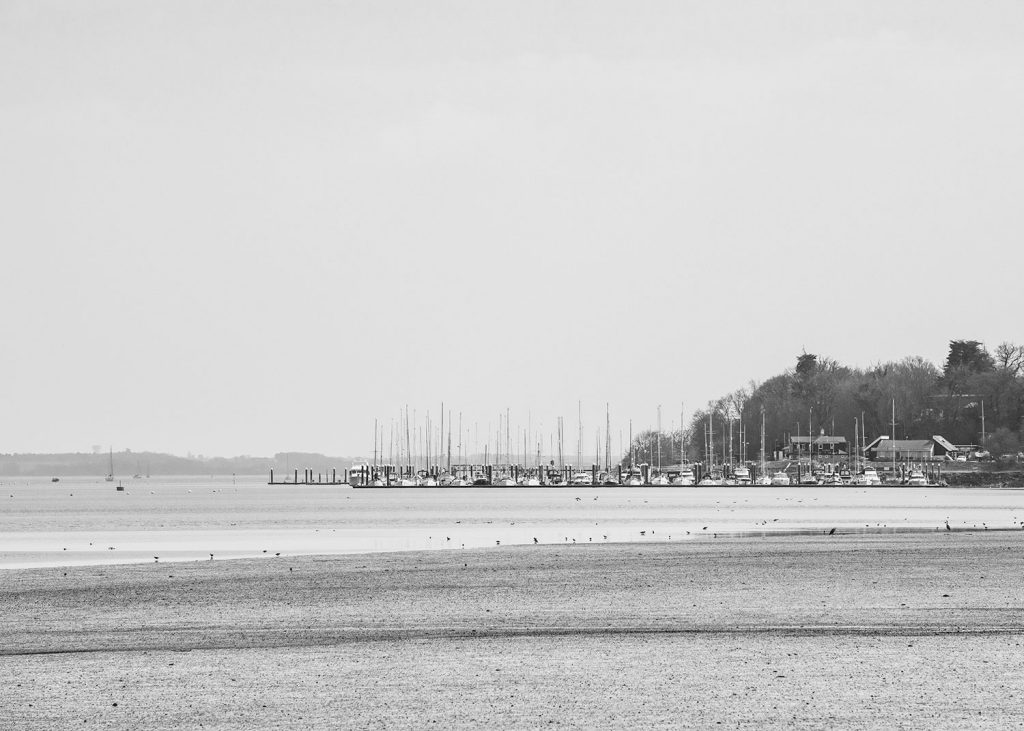 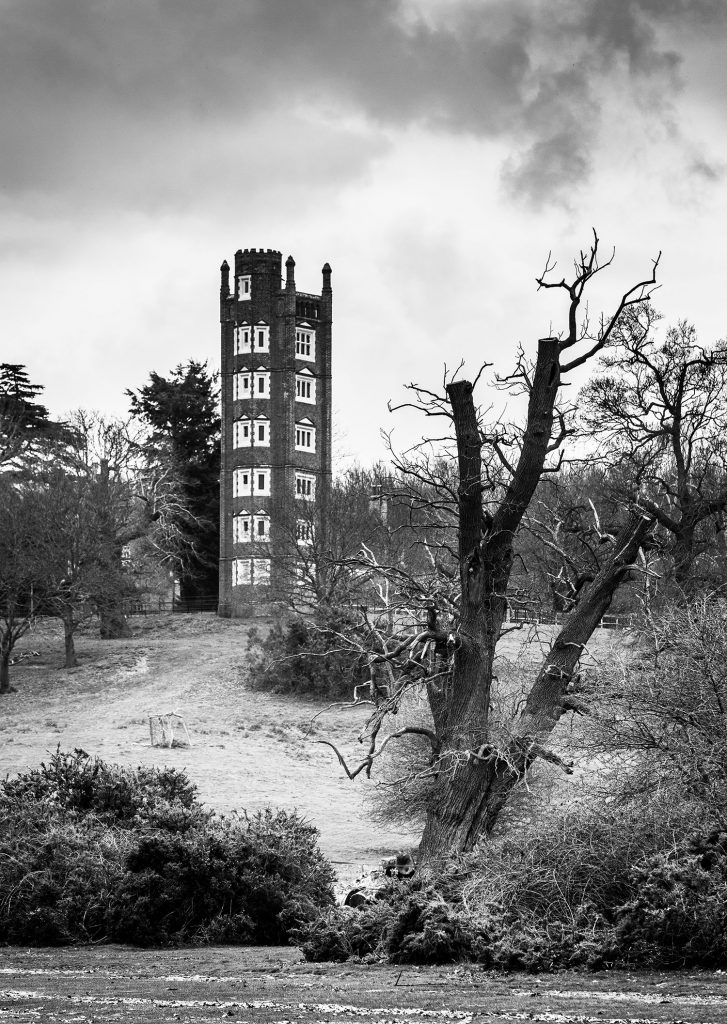 Having spent a couple of hours at Freston I drove back over the bridge and headed down to the Nacton Picnic site on the east shore of the Orwell. From here you can walk to Levington Marina in one direction but I decided to head in the opposite direction towards a fallen tree I could see on the foreshore.

The first tree I came to was an oak tree which almost looked like it was walking on the sand. Its main root was connected to the bank and all the roots under the tree appeared to be hovering over the sand. I took a couple of shots of this tree from either direction and couldn’t decide whether I preferred them processed in  colour or black and white. 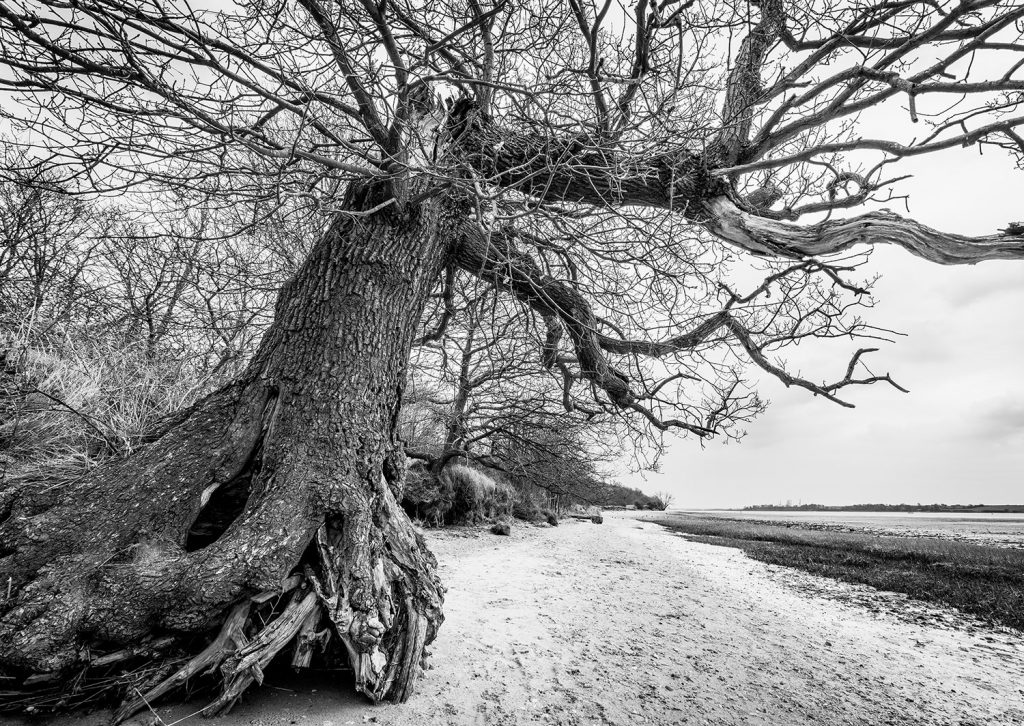 The fallen tree on the beach was actually quite difficult to photograph as there was a tree stump behind it and the mud surrounding it was pretty squelchy. I love the curve of the bay from this viewpoint and the tree acts as a great foreground subject. By now I had lost all the sunshine but somehow the grey colours seemed to suit the mood of this image. 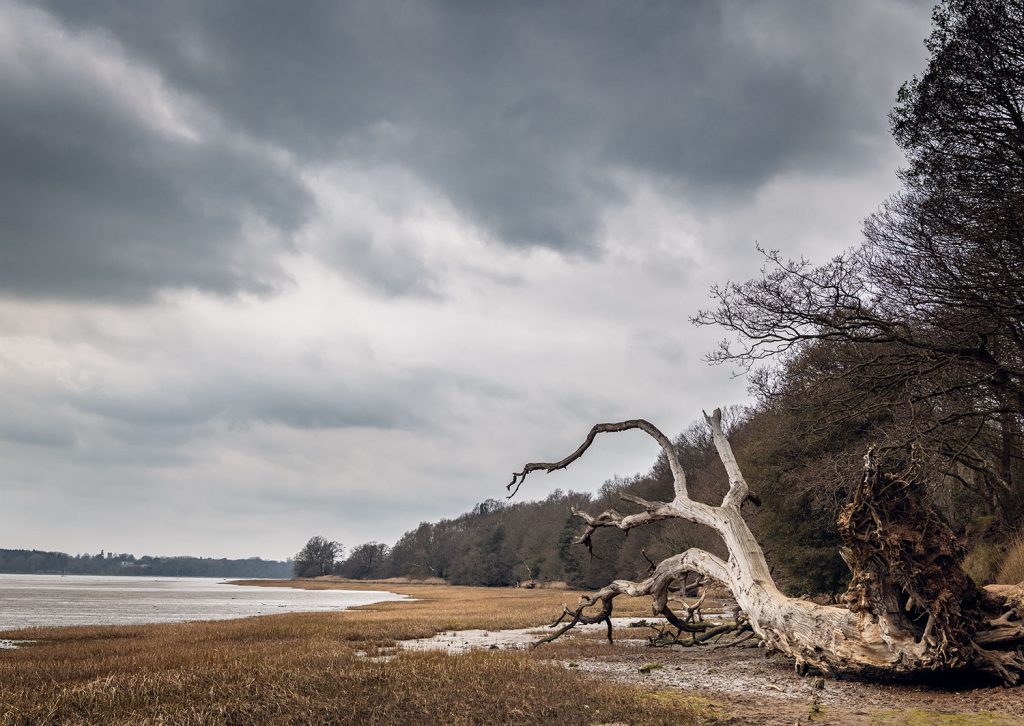 From the beach I climbed the sandy bank and had a wander through the woods which covered the shallow cliffs. There were some nice views through the trees looking towards Pin Mill and Buttermans Bay. 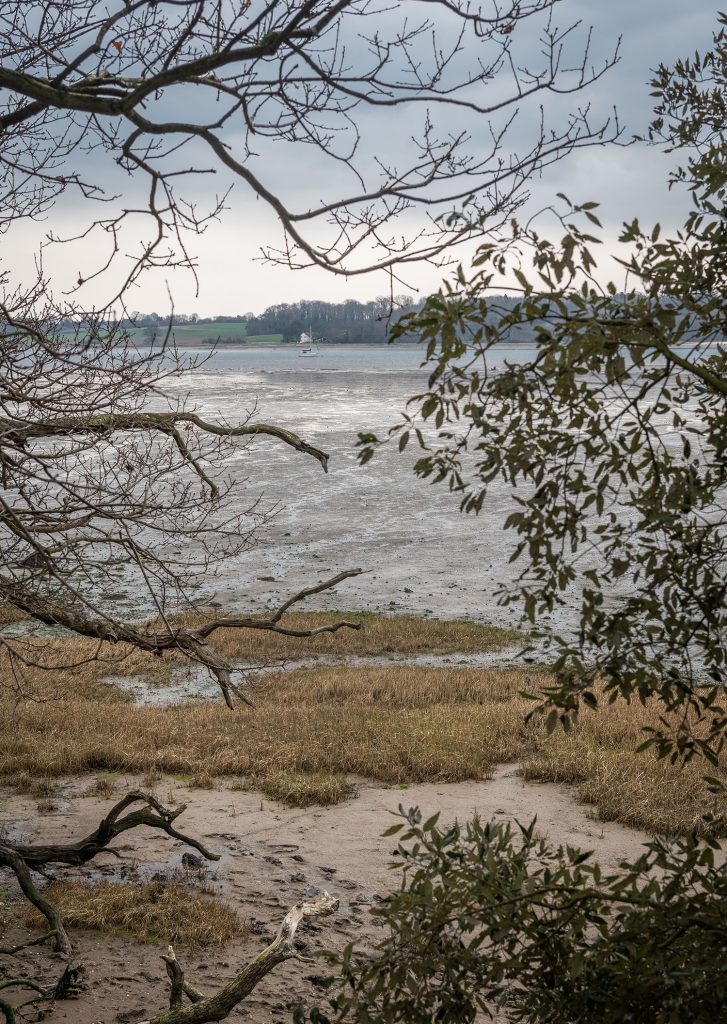 In the woods there was a fantastic old oak tree which had a really characterful shape. I decided to try a couple of canopy shots pointing the camera directly skywards and felt that these looked more atmospheric in black and white. 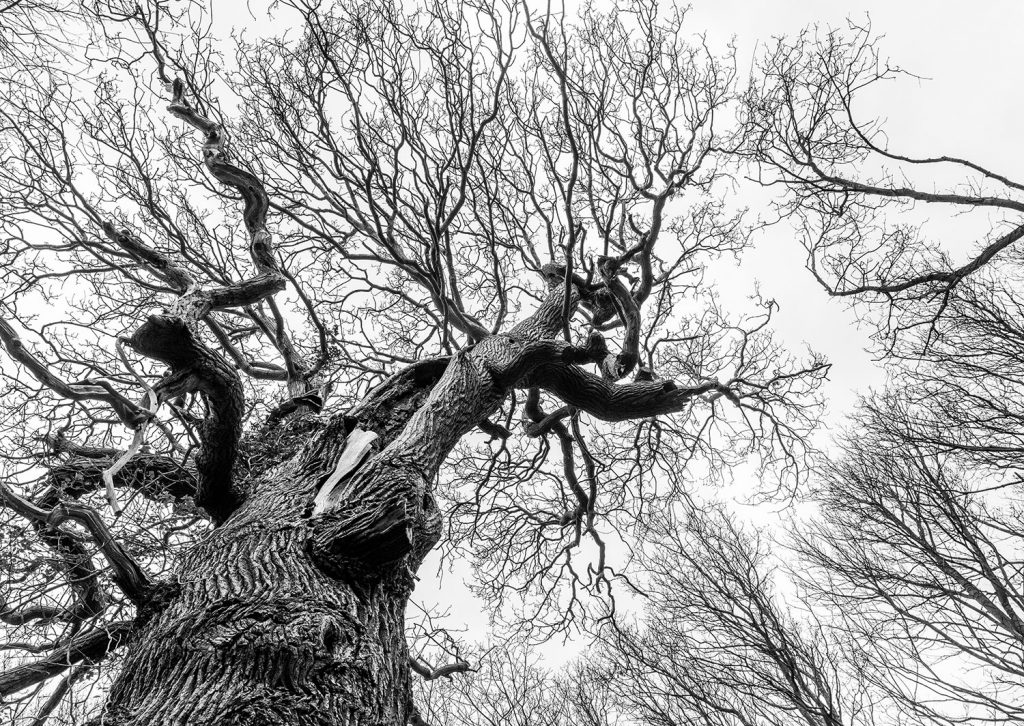 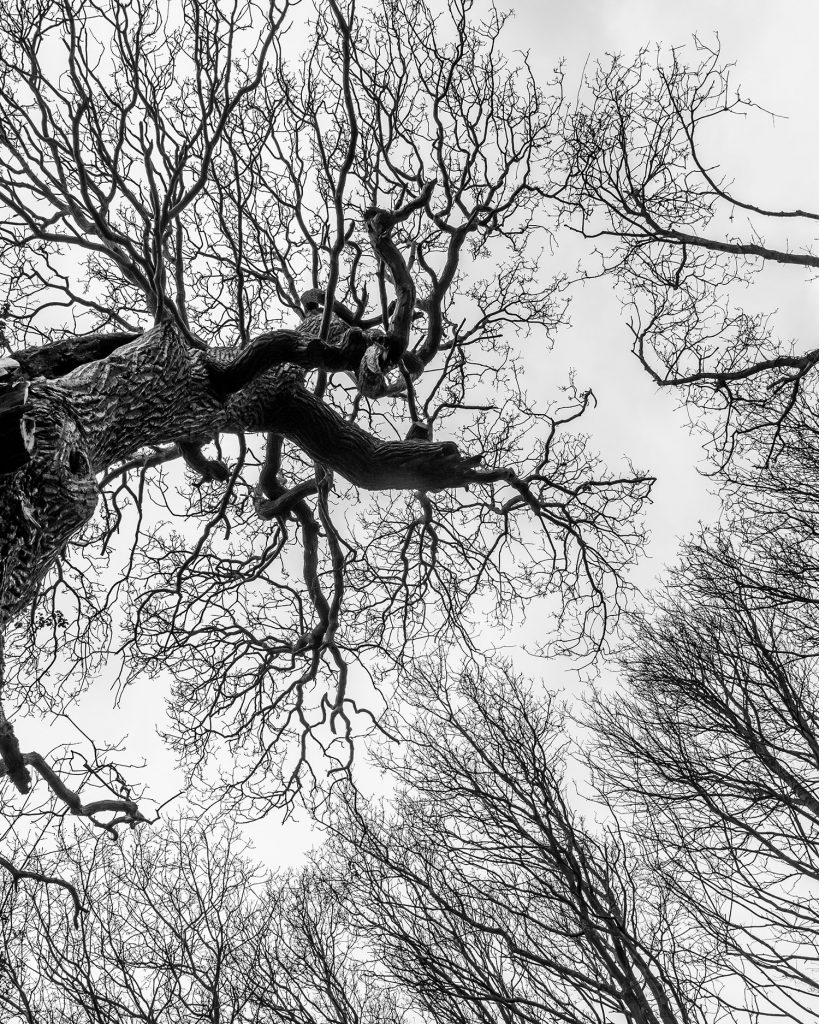 The path continued through the woods across a rickety and broken wooden board walk before arriving at a huge oak tree which had fallen to the ground and broken in two. The stump had lost its bark in places and the exposed wood contained the most amazing patterns. These became my final images of the day. 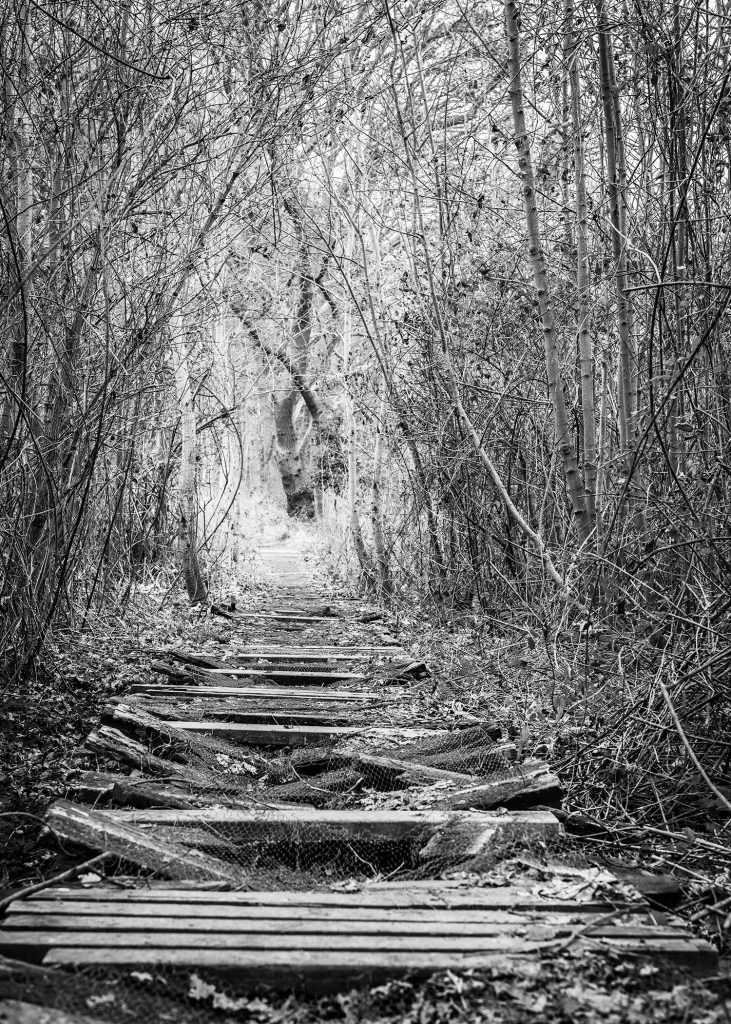 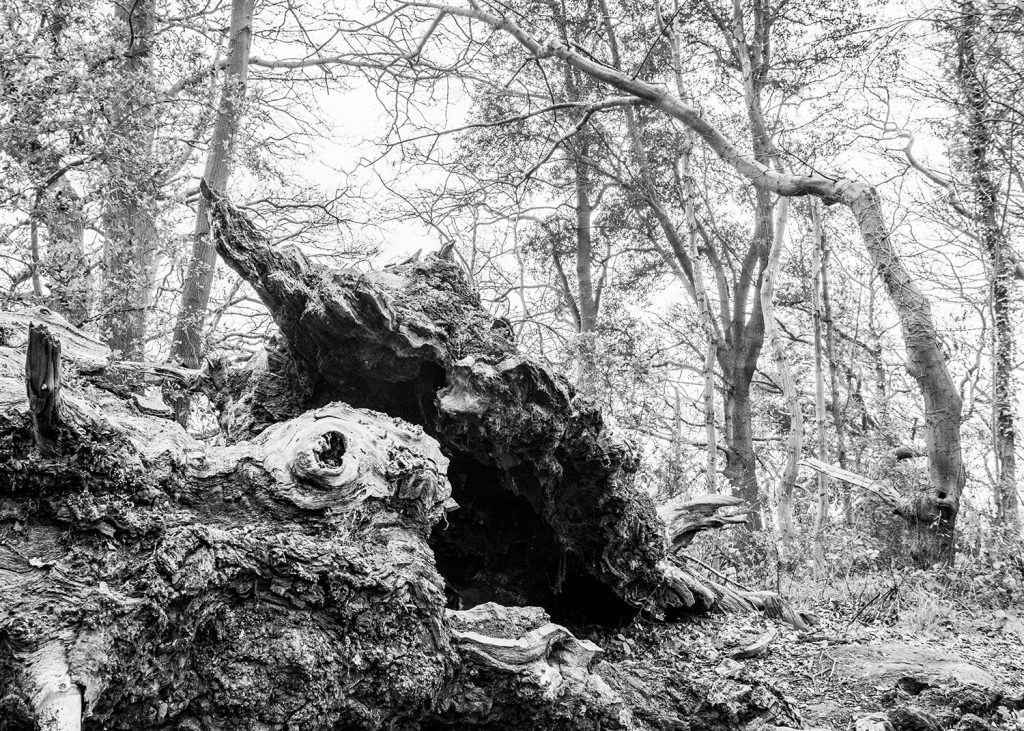 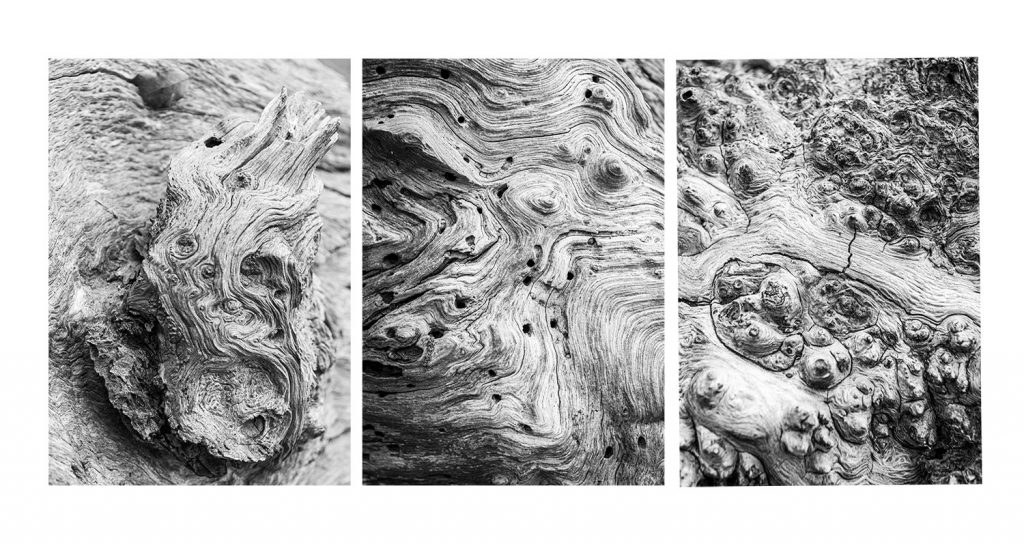 Despite having busy industrial ports at either end the Orwell is essentially a tranquil waterway with some really lovely scenery and I very much enjoyed my wanderings on opposite shores.